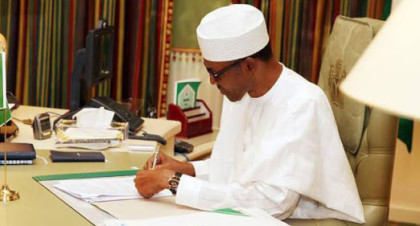 President Muhammadu Buhari  called for increased vigilance among the civilian population to help ward off suicide terror attacks on soft targets around the country.
According to SSA on media and publicity Garba Shehu, said “the President condemned in strongest terms the barbaric suicide terrorist attacks which took place in Yola on the evening of Tuesday, November 17 and in Kano today, causing numerous deaths and injuries among civilians.
The President extends his heartfelt condolences to the families of the victims as well as to the Government and people of Adamawa and Kano States respectively.
President Buhari reassures Nigerians that his administration is very much determined to wipe out Boko Haram in Nigeria and bring all perpetrators of these heinous crime against humanity to justice.
The President urges all Nigerians not to despair in the face of cowardly terrorist attacks but to have confidence in the ability of Nigeria’s reinvigorated, well-equipped and well-motivated Armed Forces and security agencies to overcome Boko Haram very soon.
He believes, however, that vigilance is a potential life saver, since security agents cannot be everywhere to deter every planned attack.
Citizen’s vigilance will therefore help to reduce the frequency of such attacks.