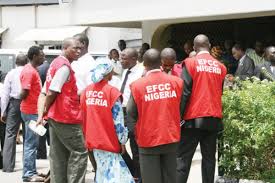 The trial of Muhammad Bello Abubakar, former Permanent Secretary, Ministry of Local Government and Chieftaincy Affairs, Sokoto State and Abubakar Abdullahi Ahmed, a former Deputy Director in the ministry, being prosecuted by the Economic and Financial Crimes Commission, EFCC, on a 43-count charge bordering on conspiracy, forgery, and money laundering continued on November 17, 2015, before Justice Rilwan Aikawa of the Federal High Court, Sokoto.

Abubakar is alleged to be the owner of five companies – Rose Gallery Nigeria Limited, Silver Spring Concept, Gidadawa Global Ventures, BAG Interiors and Eco Habitat Nigeria Limited, which have various bank accounts through which suspicious transfers were made.

One of the charges against them reads: “That you, Mohammed Bello Abubakar, while being the Permanent Secretary of the Ministry for Local Government and Community Development, Sokoto State; Abubakar Abdullahi Ahmed, while being the Deputy Director for Local Government and Community Development, Sokoto State and Rose Gallery Nigeria Limited, on or about the 6th day of May 2008 at Sokoto Judicial Division of the Federal High Court of Nigeria did collaborate in disguising the illegal origin of the sum of N2,500,000, into Rose Gallery Nigeria Limited’s account number 351337760120 with Guarantee Trust Bank Plc and thereby committed an offence punishable under Section 14 of the Money Laundering (Prohibition) Act, 2004.”

An operative with the EFCC, Usman Mohammad Mukhtar, led in evidence by prosecuting counsel, S. K. Atteh, told the court that investigations were initiated based on a petition against Abubakar, alleging gross abuse of his position to acquire wealth.

“We wrote letters to the Minister, Federal Ministry of Lands, Housing and Urban Development, requesting for a surveyor or expert to inspect and value two properties in Abuja and three in Sokoto,” Mukhtar said.

The ministry, he said, in acknowledgement of the letters, later assigned an engineer, Bello Abdulaziz, to conduct an inspection of the properties linked to Abubakar.

“Three properties in Gwarimpa Estate were surveyed and valued by Engineer Abdulaziz in the presence of a representative of the first defendant, one Nasiru Abbas on February 13, 2015,” he said.

He added that in Sokoto, Abdulaziz further inspected and valued One Centre Point Plaza, Abubakar’s current and former residences, all in the presence of the first accused person.

He further told the court that in April 2015, the ministry wrote to the Commission on the inspection and valuation of the properties conducted by Abdulaziz.

Atteh, thereafter, tendered the letters to the court as exhibit. The defence counsel did not oppose the move. The letters were subsequently admitted in evidence.

The witness also told the court that letters were written to First Bank of Nigeria Plc, requesting that the Commission be furnished with the opening package and the statement of accounts of Silver Spring Concept and Gidadawa Global Ventures.

“We also wrote requesting for the instruments used in suspicious transactions, which the bank forwarded copies to us,” Mukhtar said.

However, when Atteh applied to tender the documents in court, counsel to the first accused person, Y. C. Maikyau, SAN raised an objection.

“Based on section 258-1 of the Evidence Act 2011, these documents are classified as banker’s books and by virtue of section 89 and 90, all the documents are not original, they are copies,” Maikyau said.

Justice Aikawa then fixed the following day November 18, 2015 for the prosecuting counsel to reply to the submissions of the defence counsel and for him to rule on the said attached documents.

At the resumed sitting on November 18, Atteh argued that “admissibility is governed by relevance, based on section 4 and 5 of the Evidence Act, and the Supreme Court judgment of Abubakar vs Chuku, reported in 2007”.

Atteh added that: “It’s a general principle of law that, ones copies of documents are attached with the originals and the copies are stated on the face of the originals, the court ought to admit the documents.”