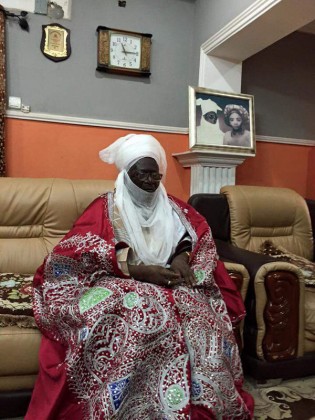 President Muhammadu Buhari commiserates with the government and people of Nasarawa State on the passing away of the highly revered Emir of Keffi , Alhaji Muhammadu Chindo-Yamusa II.
President Buhari joins them and the educational community in mourning this long standing First Class traditional ruler and Chancellor of the Nasarawa State University whom he describes as a great supporter of his administration, an advocate of peace and unity and also a preacher of ethnic, religious and political tolerance as a prerequisite for any meaningful development in the country.
The President believes that the late Emir will be greatly missed by his people as one who fully understood the roles of a traditional ruler and the expectations of the people over whom he rules. President Buhari particularly recalls the late Emir’s appeals to his subjects and Nigerians on the need to support the administration’s commitments to end the current insurgency and other vices bedeviling the country as well as his appeals to parents in the state to appreciate the value of education in development.
President Buhari also calls on the people of Nasarawa state to always remember and reflect on their late Emir’s words of wisdom as they mourn and lay their just, fair-minded father and highly respected leader to rest and urges members of his family to thank Almighty Allah for Alhaji Muhammadu Yamusa’s long reign and very fulfilled life of exemplary service to his people and country.
The President prays that Almighty Allah will grant Alhaji Yamusa eternal rest and provide a successor who will do even more for the people of Nasarawa State.