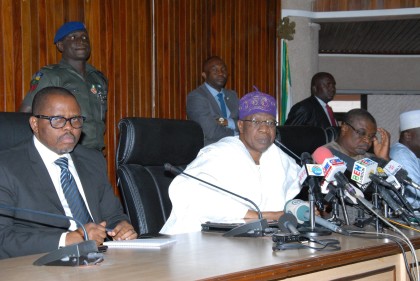 The Minister of Information and Culture, Alhaji Lai Mohammed, said the military has sufficiently degraded the capacity of Boko Haram to launch spectacular attacks while also retaking most of the territories seized by the terrorists.

”Winning the war against insurgency is about sufficiently degrading the insurgents’ capacity for action. This the military has substantially done. The rest is mop-up actions,” the Minister said at a press conference in Abuja on Tuesday, following his recent trip to Borno State to visit the areas liberated by the military.

”The military has largely met the deadline issued by the President, and would have done so totally by December. The question, therefore, is no longer whether the military will be able to meet the December deadline, it is about how to give the military all the support it requires to continue to keep our country safe from the activities of the terrorists,” he said.

Alhaji Mohammed however explained that, decimated and put on the run, the rump of the insurgents has now resorted to attacking soft targets: motor parks, entertainment centres, houses of worship, etc.

”Make no mistake about it, this will not stop overnight. It will gradually taper off. That is the way it happens anywhere such a war has been fought.

”It is also important to situate the deadline by the President in its necessary context. Insurgency is an asymmetrical warfare, not a ‘shooting war’ between two Armies. No truce or armistice is ever signed to end such war. The implication is that while Boko Haram can no longer execute spectacular attacks, hold territories, declare a Caliphate and even collect taxes, lone wolf attacks – which are like the death pangs of a dying horse – will continue for some time and then fizzle out. This is the absolute truth,” he said.

The Minister, who went on the tour of the liberated areas with 33 journalists, paid a glowing tribute to the military, saying: ”Let me say, without mincing words, that all of us, Nigerians, owe a debt of gratitude to our men and women in uniform for their patriotism, sacrifice and service. I say this because what I saw during my trip to Maiduguri, Konduga, Kaure and Bama last Saturday left me, and indeed all members of my entourage, in awe of the commitment and loyalty of the military to our country’s peace and unity.”

He rallied Nigerians to support and own the war, adding that it is not a war for the military alone.

”Gentlemen, what is missing now in the war against terrorism is the civilian component, the need for all Nigerians to support our gallant men and women in uniform, and the need for them to own the war. This is not a war for the military alone, it is a war for all Nigerians,” the Minister said, urging the media to inform our people about the heroics of the military and the progress being made.

”On our part, this Ministry will soon initiate a process to bridge the gap between the military and the media, and the structure will include top military and intelligence officials as well as senior journalists. The essence is to ensure a smoother information flow, with a view to keeping the media better informed so they can in turn better inform Nigerians about the war that is now largely won.

”We also plan to use the media to sensitize Nigerians to be more security conscious, especially now that the Christmas and New Year festivities are approaching,” he added.