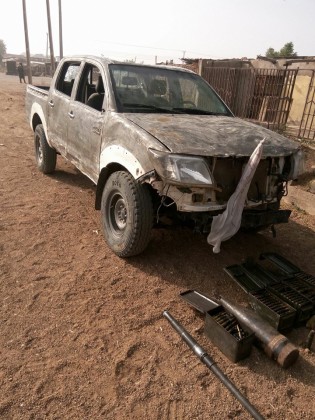 Some of the destroyed Toyota Hilux from the terrorist

The Acting Director, Army Public Relations, Colonel Sani Kukasheka Usman said members of the deadly insurgents received a big blow  yesterday as fleeing Boko Haram terrorists attempting to escape from military onslaught in Sambisa forest, through Pulka were intercepted and decisively dealt with by troops in blocking position in the area.

According to the statement made available to the press said during the encounter many of the terrorists were killed while one was captured alive. The troops also recovered a General Purpose Machine Gun, several rounds of 7.62mm (NATO) ammunition, 47 rifle magazines, 36 hand grenades and quite a number of Shilka gun empty shells.

“In a related development, troops have also dealt another decisive blow to the Boko Haram terrorists at Buni Yadi general area today afternoon. At an encounter, the troops recovered a Toyota Hilux, 2 boxes of 7.62mm ammunition and some Improvised Explosive making Devices cords.