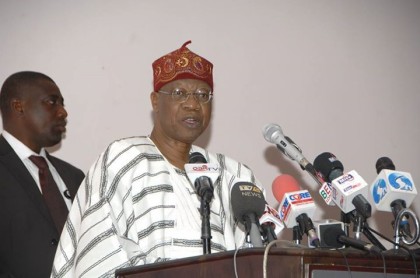 The Minister of Information and Culture, Alhaji Lai Mohammed, has appealed to religious leaders to play the leading role in de-redicalizing the North-east and ensuring peace nationwide, in view of the fact that peace is a key ingredient of development.

Declaring open the Peace Conversation with Religious Leaders, organized by the National Orientation Agency (NOA) in Abuja on Thursday, the Minister said since all religions preach peace and good neighbourliness, religious leaders ”must guide us to observe our moral duty to uphold peace”.

He assured the gathering of the determination of the Buhari Administration to end the Boko Haram insurgency, but noted that religious leaders have a great role to play in that regard.

”You, our revered religious leaders, have a great role to play in this respect. Top on the list of these roles is the need to de-radicalize those who have been exposed to extremist and violent view of religion, especially in the North-east.

”It is important for you, our religious leaders, to highlight the pristine and unadulterated version of the two dominant religious faith, Christianity and Islam, to remind all the adherents of both faith that nowhere did any of them preach hatred and violence.

”It is also important that our highly-respect religious leaders provide an alternative narration to the distortion of religion that has allowed some deranged people to hide under religion to perpetrate
evil. You, our religious leaders, cannot and must not cede the turf to purveyors of hatred and violence,” Alhaji Mohammed said.

He said his recent tour of the areas that have been liberated by the military in Borno state convinced him, more than ever, that the perpetrators are not adherents of any religion.

”Our religious leaders must make this point loud and clear for the benefit of the gullible ones who may want to believe that those perpetrating the heinous killings in the North-east subscribe to any faith,” the Minister said.

He also urged them to appeal to those who have been agitating in some parts of the country, due to their belief that their interests have not been well catered for in the Federation over the years, to
understand that while they have the right to ventilate their discontent, there is the need to do so using only the appropriate and established channels, while allowing the government time to address the issues they have raised without constituting themselves as a threat to the nation’s peace.

Alhaji Mohammed said the involvement of critical stakeholders in the peace conversation would certainly deepen and consolidate the gains of all peace building efforts by the NOA and other concerned agencies of government.