All Nigerians Will Have Access To Public Media, Minister Reassures 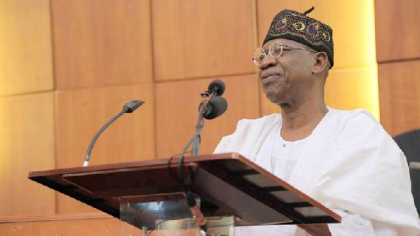 The Minister of Information and Culture, Alhaji Lai Mohammed, has reiterated his earlier statement that under the present administration, all Nigerians will have equal access to the publicly-owned media without any inhibition.

He made the reassurance in Abuja during an interactive session with members of the House of Representatives Committee on Information, National Orientation, Ethics and Values on Thursday

The Minister said the Buhari Administration will not abuse the trust reposed in it by depriving Nigerians, irrespective of their political, religious or ethnic background, the opportunity to ventilate their views through the public media.

“We believe that as publicly-owned media, the opposition and everybody in Nigeria must have equal access to us and we must also represent their views. This is a multi-cultural, multi-value and multi-opinionated country and, therefore, we must not abuse the fact that we are currently in power and we are operating publicly-owned media to deprive other Nigerians access to these media,” he remarked.

According to him, the media is a market place where everybody is free to express his or her own opinion, leaving the public to make their own decision.

The Minister told the Lawmakers that as the spokesperson for the Federal Republic of Nigeria, his ministry would strive to ensure timely dissemination of factual and verifiable information to keep the public abreast of government programmes and policies as well as get their feedback on the perception of the government.

“One of the first things we tried to do is to ensure that nobody is kept in the dark about the activities of governance. We do this by liaising with the various ministers in the cabinet because as the Ministry of Information, we are the spokesperson for the government and the country,” he said.

The Minister informed the Legislators of the plans by his ministry to launch a massive campaign, tagged ”Change Begins With Me,” aimed at re-orientating Nigerians in line with the Change Mantra of the Buhari Administration.

“What we believe is that this change will not come about if we all continue to do things the same way we have been doing them. If we do that, then you cannot expect a different result,” Alhaji Mohammed said.

He however allayed fears being expressed in some quarters that with the digital Switch Over, watching television would be out of the reach of the common man.

Earlier, the Chairman, House Committee on Information, National Orientation, Ethics and Values, Mr. Olusegun Odebunmi, said the interaction was not to witch-hunt anybody but for the Lawmakers to have an insight into the workings of the ministry, departments and agencies for a harmonious working relationship and in order to deliver the dividends of democracy to Nigerians.

The Minister was accompanied by the ministry’s Permanent Secretary, Mrs. Ayotunde Adesugba, directors and heads of agencies and parastatals under the ministry.