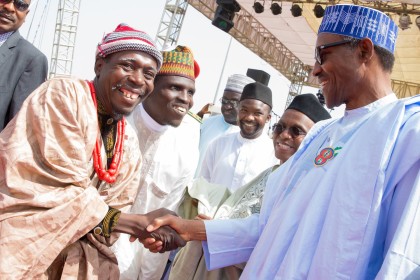 President Buhari In Shake With Some Nigeria Hausa Musician

President Muhammadu Buhari Saturday in Kaduna formally expressed his gratitude and that of the APC for the tremendous contributions artistes made to the party’s victory in this year’s general elections.

Declaring the Kaduna Music Festival (KADAMFEST) open, President Buhari said that the story of the 2015 elections could not be honestly told without acknowledging the great contribution of some artistes to the APC’s success.

“Many were the efforts made to build a strong party and persuade people that an alternative exists to the incompetence of the PDP. We politicians did our best. But the story of 2015 cannot be honestly told without acknowledging the contributions of creative people to the APC’s success.

“Many actors, musicians and writers – from different strands and in various styles- drew Nigerians to the banner of change. In speaking the language of the people, enlightening and mobilising them with words and images they could understand, I doubt if any politician surpassed the likes of Dauda Rarara and other musicians.

“You – our artists gave hope to our people and persuaded them to believe that things could really change. Musicians and actors across the length and breadth of Nigeria mobilized the citizenry to stand up for peaceful, orderly and transparent elections. You preached both peace and hope leading to democratic change.

“This application of creative talent to the cause of political change in a dire moment for our country deserves eternal gratitude. As President, I say a formal thank you today on behalf of myself, the APC and our victorious candidates.

“In appreciating talent, we have a duty to ensure that we do not turn our backs, or reduce the creative sector to something that we engage only during elections. We who have been inspired or benefitted in other ways from creative talent owe an obligation to help ensure that the talented can live on their gifts. Those who identified with us, sang, danced and rapped for us when we were seeking office have earned the right to our recognition.

“It is in this spirit that I commend the Kaduna State Government for organising the Kaduna Annual Music Festival (KADAMFEST) which offers a platform to acknowledge musicians from all over the country for helping to make 2015 the year of change.

“KADAMFEST also reflects the Kaduna State Government’s approach to giving momentum to the growth of the creative industry in the state. In creating jobs, government often has to provide funds and facilities to catalyse the opportunities.

“It is noteworthy, however, that the Kaduna State Government has attracted private sector sponsorship for this festival, and did not have to put in its own resources,” President Buhari said.

He thanked the sponsors of the festival and urged other companies to do more to support his administration’s efforts to boost employment in the country.