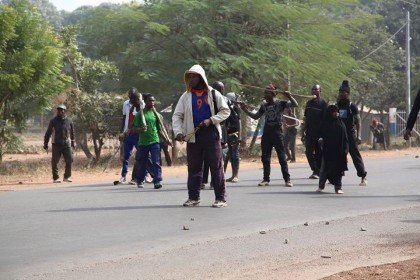 The Nigerian Army is aware of clandestine campaign of calumny and misinformation on the incident of 12 December 2015 in Zaria a group of high ranking members of Islamic Movement of Nigeria (IMN) led by one Doctor Abdullahi Danladi, a Lecturer at Ahmadu Bello University Zaria.

Earlier today he was at the University soliciting for support and telling lies about the circumstances surrounding the incident and the incident itself. He also went further to make false and unfounded allegations of casualty figures and desecration of burial grounds. It is preposterous and shows lack of concern and respect for peace and tranquility. So much as the Nigerian Army has reported the matter before the appropriate agencies and action is being taken, it would not sit back and allow some mischievous elements in the society to further create unnecessary tension and disaffection in the society.

This attitude will not be tolerated where people abuse their privileged position to mislead the public, create disaffection.

Therefore, Nigerians and indeed all well meaning people are please enjoined to be patient and await the outcome of the various enquiries instituted by various government and Non-governmental agencies. Additionally, Doctor Abdullahi Danladi and like minded individuals should be warned to desist from telling lies and misrepresentation of facts capable of misleading the general public.