Tuedon Morgan, The first Nigerian to do the North Pole Marathon 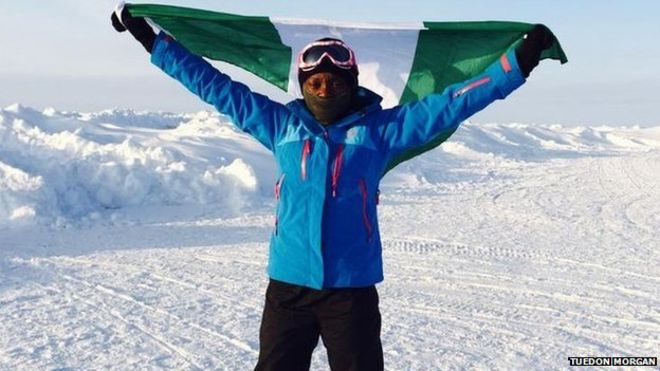 Tuedon Morgan, poses with the Nigerian Flag at the North Pole

The first Nigerian to do the North Pole Marathon tells the BBC how proud she felt to plant her country’s flag in the snow at the end of the race.
Tuedon Morgan, 42, said Antarctica, where she has been on two previous trips, was a playground compared to her experience at the North Pole last week:

The North Pole was extremely difficult for me: It was so cold, with temperatures of -41 C, and I noticed that my body was losing a lot of energy – it was like the magnetic field was sucking all my energy out.
The last 4km (2.5 miles) were the hardest for me – I started to see buildings where I knew that there was nothing there.
I didn’t have any training for this – I didn’t have any snow to train on.
In Qatar, where I live, it’s the extreme opposite: I wear T-shirts and shorts to run; in the North Pole you have to wear all these different layers. 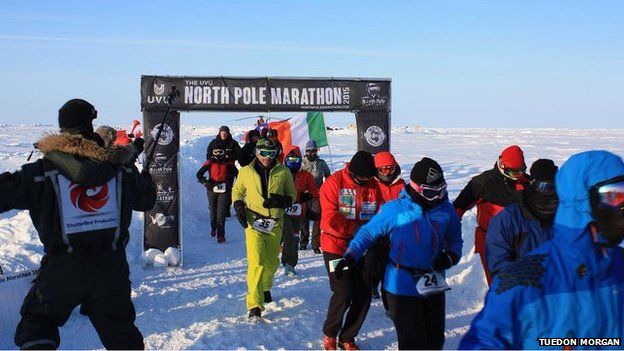 There are no crowds at the North Pole Marathon to cheer on the runners (PHOTO: BBC)

We were 44 competitors from 22 countries and I finished quite late, I was one of the last people to finish. But I compete[d] with myself.
I was just singing and praying and when I got to the bend where I could see where other people had planted their flags, I kept saying to myself: “I have to plant the Nigerian flag there; your country’s flag has to be there.”
A South African has done the race; I don’t think any other Africans have done it, so for me it was awesome to do that for my country, for Nigeria and for Africa as a whole.
As I was leaving, other Nigerians arrived – they had been to the geographical North Pole and they had raised the Nigerian flag there as well.
It was awesome. I would do the North Pole again. Right now, sitting here, I’m thinking: “I want to go back to do it again.”

‘I love food’
It all started one day in January 2008, when I woke up and looked myself in the mirror and I said: “I need to change my lifestyle.”
I would go to bed early and wake up really tired, I weighed 121kg, which is about 266lbs, I was a big girl. 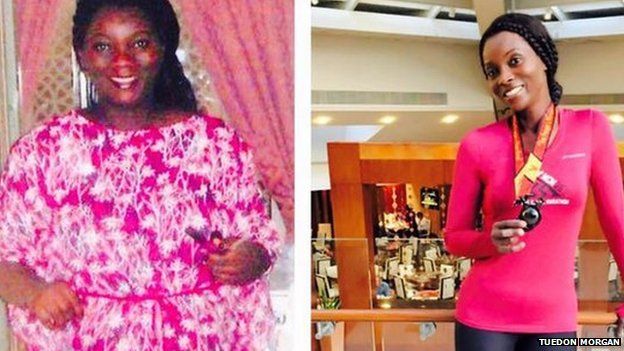 I was extremely happy with the way my life was, I never envied any slim person, but I was always breathless. I’ve got four kids, I could barely do much for them, my bad leg was getting worse, my doctors would give me some injections and would tell me how to lose weight.
That day I made up my mind and I said I was going to commit to this, so I got into the gym and I started walking on the treadmill and then I went on the road and I just built up from there.

I joined a running club – the first day they wanted to do a 7km run and it took me over two hours – I was the last one to finish but I went back the next day, I just wouldn’t give up.
For me, losing weight, I wanted to do it as slowly as possible, gradually. I needed to learn to eat.
I think my biggest problem was food – I love food and that’s why myself and a friend, we’ve founded a weight-loss group, we’ve got over 5,000 African women in it, we have a cook book and they can use our menus free of charge.

‘It’s time management’
It’s been very difficult because I have four boys, I have my husband, I have my job.
People say: “I don’t have the time” – everyone has the time, you have 24 hours, it’s time management.
I don’t watch TV late at night. I wake up at 03:30 and I go running from 04:00 to 05:30. When I come home, I wake my husband and my kids.
So my running time in the morning is my time, I’m not using family time. It’s all about compromise. 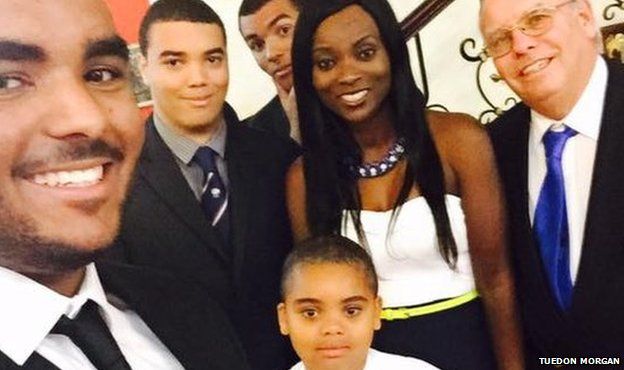 Tuedon Morgan says her running does not eat into spending time with her family (PHOTO: Tuedon Morgan)

My husband, when I came home yesterday from the North Pole, said: “What’s our next challenge?”
I have already done 33 marathons – but every race is different.
For example, in the North Pole we didn’t have spectators. In New York they virtually lift you up your feet, the crowd. London is the same.
The message I’m sending out there is always belief in yourself, you have no limits, you can do whatever you want to do.
We’re the ones who set the boundaries. It might take longer for some but if you’re persistent, if you keep knocking, it will happen.