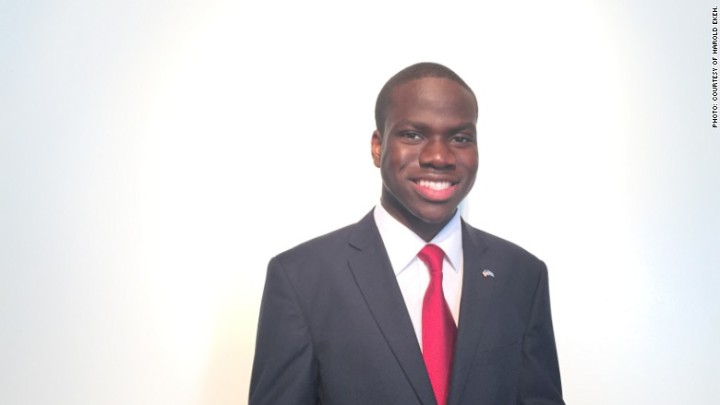 Ekeh was born in Nigeria and came to the United States when he was eight. He wrote his main college essay about the struggle to adjust, including being clueless in U.S. history classes at school. He said he would ask his parents repeatedly why they moved.
“We had a fairly comfortable life in Nigeria, but they told me we moved to America for the opportunities like the educational opportunities,” he recalled.
The salutatorian is quick to credit his parents, school and community for his success.
“I am very humbled by this,” Ekeh said. “It’s not just for me, but for my school and community. We can accomplish great things here.”
Harold Ekeh actually got into all 13 schools he applied to, including MIT and Johns Hopkins.

A passion for science: He wants to major in neurobiology or chemistry in college and later become doctor and, ultimately, a neurosurgeon. He was named a 2015 Intel Science Talent Search semifinalist earlier this year for his research on how the acid DHA can slow Alzheimer’s.
For Ekeh, the cause is personal. His grandmother was diagnosed with Alzheimer’s when he was 11. One of his proudest moments was running home to tell his mother and aunts about the breakthroughs he was finding with DHA.
“When other kids would say, ‘I want to be a superhero or police officer,’ I would say, ‘I want to know what is on the inside of us,'” he said.
Outside of the lab, Ekeh directs a youth choir at his church, plays the drums, is part of Key Club and Model UN and was elected to the Homecoming court. He speaks Igbo and Spanish and has a 100.5% GPA. He’s proud of acing the AP History Exam despite his early struggles with the subject.

Elmont High School is 99% minority. Ekeh is the second student in recent years to win a prestigious Intel Science award.
Principal John Capozzi calls Ekeh “one of the most humble young men I’ve ever had the opportunity to meet.” The lab where Ekeh did his award-winning research is modest and only staffed part-time by a passionate chemistry teacher, but the community makes the most of what it has.
Ekeh spent the coming weeks visiting all the schools before making his final decision.

His advice to other high school students is simple: “Like my parents always told us, the secret to success is unbridled resolve.”

He announced his decision to become a bulldog on Facebook Friday: “Officially Committed! Yale Class of 2019!!!!!”
In a statement, Ekeh added: “I look forward to the next phase of life, the life-long friends I will make, and all the new opportunities that await me at Yale University.”
Ekeh was born in Nigeria and came to the United States when he was eight. He wrote his main college essay about the struggle to adjust, including being clueless in U.S. history classes at school.
His parents had told him they moved to America for things like the educational opportunities, Ekeh told CNNMoney last month after he found out he was accepted to all the Ivies.
Even then, Ekeh was leaning towards Yale, where he competed for Model UN. Some of the students there became his friends and mentors and offered him advice on the admissions process.
“Ultimately, through my experiences with Yale University, I realized that Yale would truly become my home away from home for the next four years,” he said in the statement.

He will graduate this spring from Elmont Memorial High School on Long Island as salutatorian. He wants to major in neurobiology or chemistry in college and later become a doctor — a neurosurgeon, specifically.
“Thank God and everyone who has helped me along the way to receive this amazing opportunity,” Ekeh said on Facebook.
“It has been both an incredibly exciting and humbling experience and I look forward to the opportunities that lie ahead!”
CNNMoney’s Heather Long contributed reporting for this story.