Can Nigeria Survive on $60 Oil?

With reports that Federal Government borrowed money to pay workers’ salary, and the rampant non-payment of salary in several states of the federation – it seems clear that the oil party is over for emerging markets, which have been able to spend and balance their budgets with high crude prices, and may be trouble looms for the unprepared.

Emerging markets have balanced budgets over the past three to four years with $100-per-barrel oil on average, up from $30 per barrel a decade ago, writes Deutsche Bank chief Economist Robert Burgess with fellow economists Armando Armenta, Kevin Koerner, Oliver Masetti and Melhem Melhem, as well as chief Strategist Yaroslav Lissovolik and research associate Artem Zaigrin. 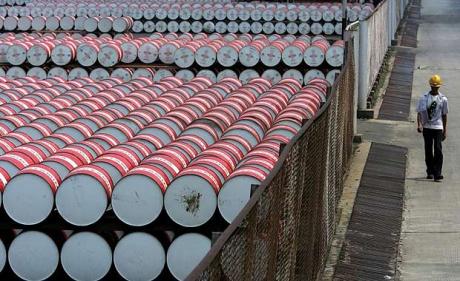 Future contract pricing suggests that the drop in oil prices, in the $60s per barrel of late, is more permanent than temporary. OPEC said this week that the price could dip again to $40 over the next decade, and Goldman Sachs warned of another dip in crude prices. “A period of adjustment will therefore be necessary,” the Deutsche team writes.

Gulf countries including Saudi Arabia can tap considerable reserves to balance budgets, while other emerging nations like Nigeria that have already devalued their currencies may need more depreciation to preserve the local-currency value of their oil revenues. Spending cuts and/or more debt are likely too. Here are some quick notes on budgetary “breakeven” oil-price thresholds, by country, from Deutsche:

RUSSIA: “With some spending restraint, this should reduce the breakeven price in Russia to $78 per barrel, limiting the deficit to levels that can be readily financed from the oil savings funds and moderately higher borrowing. While we see little need for further currency weakness at current oil prices, the central bank may look to limit any rouble strength.

NIGERIA: Reduced spending and the devaluation of the naira have reduced the breakeven price to $90 per barrel. We think further depreciation will likely be necessary to avert a third year of deep spending cuts or much higher borrowing. Progress in reducing the “leakage” of oil revenues could alleviate this pressure.

VENEZUELA: has also effectively devalued its currency, reducing the breakeven price to $89 per barrel, [but the price] remains overvalued and we think that the risk of an external default looms large.

SAUDI ARABIA: At about $105 per barrel, its breakeven price is now one of the highest in emerging markets. The resulting large budget deficit (18% of GDP) will be financed from accumulated savings. We think the government will begin to restrain spending next year; and with little negligible debt and assets amounting to 100% of GDP, it can afford to adjust relatively slowly.”