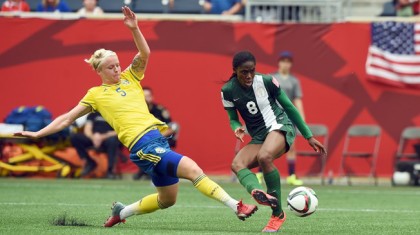 Sweden(rank 5) gave up a 2-0 lead to Nigeria(rank 33) only for substitute Linda Sembrant to put the Europeans back in the lead, which Francisca Ordega cancelled out with three minutes remaining for a dramatic 3-3 draw in the first game of Group D at the FIFA Women’s World Cup Canada 2015™.

The Super Falcons, having never beaten Sweden on their three previous meetings, came out flying in the first few minutes and had the Swedes on the back foot for much of the first quarter of an hour.

But an unfortunate own goal from Desire Oparanozie gave the Swedes the lead 20 minutes into the match. Emma Berglund’s flicked header from a corner kick was redirected into Nigeria’s net by the No9’s chest. A poor clearance off another Swedish corner made it 2-0, Nilla Fischer able to tap in to an empty net after the ball made its way through the crowd.

Nigeria’s front line refused to go quiet, however, and just after the break two goals in quick succession levelled matters. Ngozi Okobi’s brilliant first touch afforded the No13 plenty of room and space before coolly firing past Hedvig Lindahl. Three minutes later, Asisat Oshoala, the golden shoe winner at the FIFA U-20 Women’s World Cup Canada 2014 opened her account for this tournament with a fine individual effort after a well-played long ball from Onome Ebi.

Sembrant handed the lead back to Sweden after good build-up play on the left side resulted in Lina Nilsson’s cross that the substitute managed to direct past Precious Dede with her thigh.

However, Francisca Ordega salvaged a point for the Super Falcons three minutes from time with a shot that managed to slip through the legs of Lindahl, leaving the two sides tied at 3-3.

Live Your Goals Player of the Match: Ngozi Okobi (Nigeria)