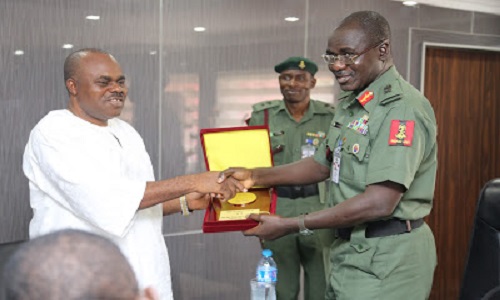 The Nigerian Army has been commended for doing its best in containing the menace of Boko Haram terrorists. This commendation was made today by Professor Bem Angwe, the Executive Secretary of National Human Rights Commission at the office of the Chief of Army Staff (COAS) Major General Tukur Yusuf Buratai, when the former paid courtesy call on the latter.

Speaking further, Professor Angwe congratulated the COAS on his appointment, describing the visit as a family one. He commended the Nigerian Armys efforts in the ongoing fight against the insurgency in the North Eastern part of the country, reiterating the need for a good relationship between the Nigerian Army and the Commission at all times. He applauded the qualities exhibited by the Nigerian Army personnel by ensuring that they put up their best to have a secured Nigeria.

The Executive Secretary promised to support the Nigerian Army in the discharge of its constitutional duties, commending the COAS for visiting the troops in the frontline fighting Boko Haram insurgents hours after officially taken over the mantle of leadership of the Nigerian Army. Professor Angwe further expressed the Human Rights Commissions determination to partner with the Nigerian Army to ensure that human rights are protected, adding that both organizations have the common mission to protect human rights, hoping that the partnership will benefit the Nigerian people.

Responding, the COAS, Major General Tukur Buratai thanked the Executive Secretary for the visit and promised that the Nigerian Army will continue to collaborate with the Commission, adding that all aspects of human rights will continue to be respected as enshrined in the Constitution.

He assured the Commission that the Nigerian Army will always discharge its duties professionally and responsively in line with his vision, affirming that no personnel will be involved in human rights abuses while carrying out assigned tasks under his watch. Present during the visit were senior officers of the Army Headquarters, as well as management staff of the commission.

From The Directorate Of Army Public Relations

NEWER POSTN2.2 billion Is Not Spent On US Trip, Rather…
OLDER POSTSecurity Operatives Bars Youth Group From Conducting Elections