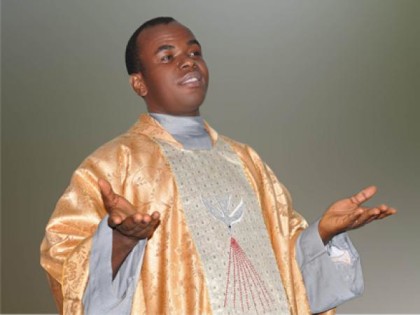 Mbaka condemned the action in Enugu on Saturday in a sermon at his weekly Adoration Ministry.

The cleric urged youths in the South East and South-South of the country to go back to their business as the protest could lead to destruction of their lives.

He said locking up their shops and disrupting economic activities will not add any naira to their pockets, he urged them to resolve their grievances through dialogue.

The Cleric lambasted those leaders that were behind the agitation and protests, saying that they should use their children for the struggle.

Fr. Mbaka commended President Muhammadu Buhari for appointing ministers from the zone and assigning them with good portfolios.

He said that the five states in the zone had minister each as prescribed by the Nigerian constitution as well as other key security and protocol officers that serves under president and his wife.

The reverend father also commended the recent free health screening initiative by the Wife of the president, Mrs Aisha Buhari, in Enugu, says it shows her love for the people of the region.

He blamed the Igbo leaders for not living up to the expectation of the people in the area, adding that past governors, National Assembly members failed woefully in discharging their mandates.

Mbaka called on the new Minister of Labour and Employment, Dr Chris Ngige, to use his office to employ youths in the region, adding that it would stop what he called another Boko Haram in the south east if not curtailed.

He praised Buhari’s war against corruption, saying it had enthroned due process and sanity in governance.

The cleric, urged Nigerians to exercise patience with the president as he has good plans for the nation.