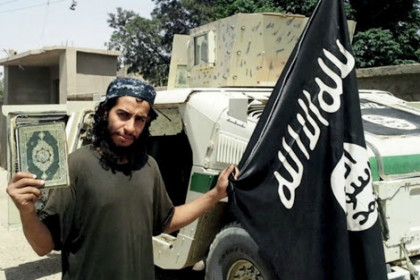 Police officials briefed on the investigation said that a cellphone dumped in a trash can outside the Bataclan concert hall led to ringleader. It contained a text message sent about 20 minutes after the massacre began that read: “We’re off, it’s started.”

Investigators quickly identified Abaaoud as the architect of the deadly attacks in Paris, but they believed he had coordinated the assaults against a soccer stadium, cafes and a rock concert from the battlefields of Syria.

That situation changed profoundly on Monday, when France received a tip from a non-European country that Abaaoud had slipped into Europe through Greece, Interior Minister Bernard Cazeneuve said.

Paris prosecutor Francois Molins said Abaaoud was later traced to the apartment in Saint-Denis through phone taps and surveillance.

Abaaoud is believed to have known some of the attackers responsible for the Paris massacre in Moleenbeek his neighborhood in Brussels, Belgium where he grew up, including Brahim Abdeslam who blew himself up outside a cafe in one of Paris’ trendiest neighborhoods. Abdeslam’s brother, Salah, is still being sought as a suspected accomplice.

In addition, he was suspected of links to two jihadis returning to Europe from Turkey, and a “wannabe jihadi” who upon his arrest in August told French intelligence that he had been recruited by Abaaoud in France, the interior minister said.

Over 129 people are killed and hundreds of others are wounded in a series of attacks in the coordinated attack in Paris.

Abaaoud is identified as ringleader of the three teams of extremists who attacked the French national stadium, Paris cafes and restaurants and the Bataclan theater with automatic weapons and suicide bombs. At least one suicide bomber is a Brussels friend of Abaaoud’s, as is another suspect still at large.