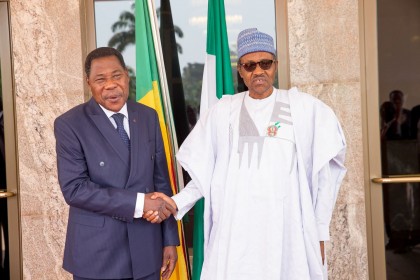 President Muhammadu Buhari is in Cotonou, the Republic of Benin for the the 11th Summit of the Heads of State and Government of the Niger Basin Authority.

The president who arrived Cotonou International Airport at about half past two Friday afternoon was received by a high powered Government delegation led by the Prime Minister of the Republic Mr Lionel Zinsou.

Also at the Airport to receive him include Nigeria’s Ambassador to Benin Lawrence Obisakin, the Minister of water Resources Suleiman Adamu, Minister of State Foreign Affairs and members of the Nigerian community in the neighbouring west African country.

Nine Heads of State of the member countries of Niger Basin Authority are attending summit during which new Secretary General  of the organisation is expected to be appointed.

The Minister of Water Resources Suleiman Adamu speaks on Nigeria’s expectation at the Summit.