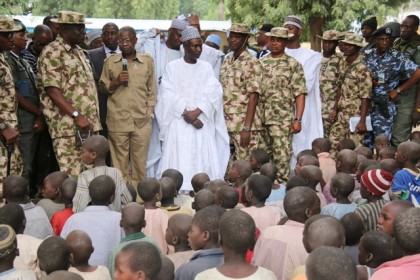 Lai Muhammed In One Of The IDP’s

The Minister of Information and Culture, Alhaji Lai Mohammed, has appealed to the nation’s broadcasters, under the aegis of the Broadcasting Organization of Nigeria (BON), to support the Federal Government in the war against terrorism.

Speaking during a meeting with representatives of BON members in Abuja on Thursday, the Minister said the Federal Government is launching a National Security Awareness Campaign ”as part of efforts to provide the missing civilian component of the war against terrorism”.

”Specifically, the campaign is aimed at sensitizing Nigerians to the need to support the military, which has availed itself creditably in the battle, as well as to own the war. It is also aimed at alerting Nigerians to the need to be more security conscious, to be able to identify Improvised Explosive Devices (IED), the weapon of choice being deployed by the cowardly terrorists, and also to fish out suicide bombers before they strike,” he said.

The Minister said while the Federal Government believes that the military has succeeded in massively degrading the capacity of the Boko Haram terrorists to carry out the kind of attacks they used to launch in the past, there is still the challenge of preventing the terrorists from attacking soft targets.

”We know that the terrorists, who have been routed from their strongholds, have now resorted to attacking soft targets, that is highly vulnerable places like markets, motor parks, mosques, entertainment centres and schools, killing innocent people.

”That is why we believe that, as a government, we must now sensitize our people, so that they can be more security conscious and help to end the spate of suicide bombings that are the last vestiges of a fading insurgency.

”In this regard, we need all Nigerians to join hands together. We need all hands on deck. And we need a very important organization like yours, the Broadcasting Organization of Nigeria, to assist us in creating awareness among our people,” he said.

Alhaji Mohammed lauded the NTA, the FRCN and VON for taking up the gauntlet by running awareness campaign messages on their stations, saying since December 2015, these stations have dedicated many slots, some in prime time, to airing these campaign messages in different languages.

He also commended the News Agency of Nigeria for using its SMS Platform to send security
awareness messages to Nigerians.

”Now, we want to call on the remaining members of BON, most of which are represented here, to emulate the organizations that I have mentioned in running the security awareness campaign messages on their stations.

”I know some will argue that, unlike the NTA, FRCN or VON, they are privately-owned and they need to make money to pay their workers and run their stations. That is a legitimate argument. But the truth is that unless the nation is at peace, the stations cannot even carry out their operations,” the Minister said.

He also informed the BON members that the Federal Government will be launching a major campaign, tagged ‘Change Begins With Me’, with a view to achieving attitudinal change among Nigerians.

”This is because we believe that the change we so much desire must start with each and everyone of us, if it is to endure. The change must also come from within the heart, rather than being forced,” Alhaji Mohammed said.

Responding, the Chairman of BON, Mr. Sola Omole, assured that the organization would be supportive of the government’s initiative to sensitize Nigerians to the war against terrorism.

”I pledge the support of BON as an organization to support the Federal Government in this initiative,” he said.