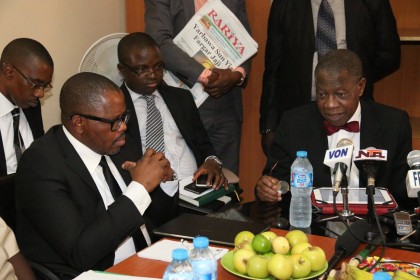 The Minister of Information and Culture, Alhaji Lai Mohammed, on Monday visited two Hausa-language newspapers based in Abuja in continuation of his ongoing consultation with key stakeholders in his ministry.

The Minister used the opportunity provided by the visit to Rariya and Aminiya newspapers to solicit the support of the media in general and the newspapers in particularly for the federal government’s fight against corruption.

He said he chose to enlist the support of the indigenous language newspapers for the sensitization campaign against corruption because of their influence and large followership.

Alhaji Mohammed said it was necessary to galvanise the public against corruption in order to guarantee the availability of funds for social and infrastructural development, despite the economic downturn occasioned by the crash in oil prices.

“If only we fight corruption successfully, there will be more money for everybody. If the leakages can be blocked successfully, I can assure you it won’t matter whether oil sells for $10 or $5, we will be able to run this country efficiently.

“If we don’t really take care of corruption, even the 2016 budget, we will not be able to operate it because what we have found out is that it is these leakages (corruption) that are making the country to bleed. It is not by accident that between 1999 and today, the budget has been increasing every year yet poverty has also been increasing. Why? Because of corruption.

”In 1999, the entire budget was N947 billion, in 2016, it is N6 trillion. Has poverty gone down? It has increased almost by that margin. The issue of corruption must not be taken lightly. We must fight it as we fought Boko Haram, like we fought Ebola. We must fight it to a standstill,” he said.

Alhaji Mohammed once again debunked the insinuation that the anti-corruption war was an orchestrated vendetta against the political opposition, insisting that it was a battle to pull Nigeria back from the brink and return the nation to the path of economic growth and sustainable development.

He attributed the decay in infrastructure, grinding poverty, stunted economic growth, widespread inequality, maternal mortality and other maladies afflicting the nation to corruption in governance which, he said, must be fought to a standstill for the country to achieve meaningful development.

The Minister hailed the indigenous language newspapers for bridging a critcal information gap by ensuring that those who could not read in English are fully kept abreast of developments in the country, calling them ”the unsung heroes of our democracy”.

“You are catering for those who could have normally been left behind…I am really impressed with the sacrifices you are making. In nation-building, everybody plays his or her own part. We might be the ones that people see today but there are people like you who are toiling, risking their ventures, fortunes and risking their lives just to get people informed,” he said,

In his remarks, the Publisher of Rariya newspaper and former Minister of the Federal Capital Territory, Dr. Aliyu Modibbo, described the Minister’s visit as historic, saying Alhaji Mohammed is the first Information Minister in the country’s recent history to visit an indigenous language newspaper in the country.

He said Rariya newspaper was gradually migrating to online journalism because of its tremendous appeal to the people, having recorded 290,000 consistent readers online and 1.4 million followers on Facebook.

Also speaking during the Minister’s separate visit to his paper, the Chief Operating Officer of the Trust Newspapers, publishers of Aminiya, Mr. Abhay Desai, pledged the total support of the organization for the Federal Government’s efforts to reposition the country for progress and development.

He said the Minister’s visit provided a lot of encouragement for the management and staff of the newspaper to continue to do their best to keep the people informed.