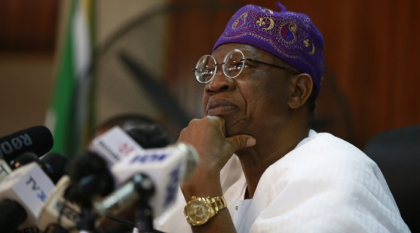 Addressing the well-attended meeting in Lagos, the Minister thanked the Columnists for the passion and the dedication they have devoted to their different columns, saying it takes ”passion, dedication and commitment to continue to write regularly on topical issues”

He said even when some of the Columnists have been critical of the Buhari Administration, ”we have taken away something positive from your write-ups”, adding that as opinion moulders, they have a big role to play in deepening the understanding of issues, especially as they concern governance, by the citizens.

”The good news is that there is no shortage of dedicated, hardworking, committed and patriotic people within and outside the government, nor is there a shortage of ideas, to surmount these challenges. We also have purposeful leadership, being provided by President Muhammadu Buhari. And as a member of this Administration, I can tell you that the government is working round the clock to put our country on the path of sustainable growth and development.

”But the government cannot do it alone. We need the support of all Nigerians, irrespective of where they lean politically. We need the support of opinion moulders like you. We need your understanding. We didn’t get into the situation we are today overnight, and we will not get out of it overnight. It will take consistent and persistent commitment, hardwork, frugality and love of country to turn things around, and there is no scintilla of doubt that the Administration of President Buhari has what it takes to do just that,” he said.

The Minister said the government is not averse to criticism, adding: ”Criticise us when you may, but make it a constructive criticism.”

”In the days ahead, we will launch a national re-orientation campaign, tagged ‘Change Begins With Me’, aimed at achieving a paradigm shift in the way we do things. We are soliciting your support for these campaigns,” Alhaji Mohammed added.

He assured that the government’s engagement with the Columnists will continue, saying: ”We will always do our best to keep you informed, so that you can in turn deepen the understanding of the citizens, especially about governance.”

NEWER POSTPresident Buhari To Serve As Grand Patron Of Committee On Corporate Philantrophy
OLDER POSTFULL TEXT: Speech By President Muhammadu Buhari President At The Reception For Nigerian Athletes And Officials Who Did The Nation Proud At International Competitions