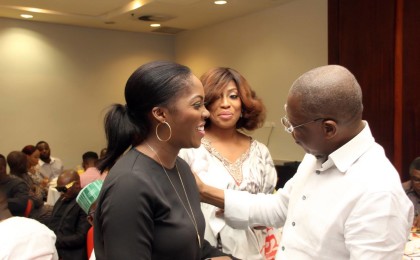 The Minister of Information and Culture, Alhaji Lai Mohammed, has solicited the support of the entertainment industry to boost the Federal Government’s soon-to-be launched national re-orientation campaign, tagged “Change Begins With Me”.

The Minister made the appeal in Lagos on Sunday when he met with top musicians drawn from the country’s six geo-political zones.

He said the campaign, which is anchored on value re-orientation and attitudinal change among Nigerians, would solidify the Change Mantra of the Buhari Administration.

Alhaji Mohammed said the campaign would arouse national consciousness against the negative attitudes among Nigerians, such as indiscipline, loss of values, lateness and other unscrupulous attitudes, that have retarded the development and progress of the nation.

“This campaign, which is a bigger and deeper version of the old War Against Indiscipline, will seek to make Nigerians realize that the change they so much desire begins with them, hence the title of the campaign ‘Change Begins With Me.’ This campaign is aimed at solidifying the Change Mantra of the present government,” he said.

The Minister urged the invited musicians to cooperate with the ministry in ensuring the success of the campaign, which is due to kick off in March.

“We will appreciate if you will come together and develop a theme song that will help propagate the ideas embedded in the campaign and make it attractive to the young and the old, men and women and indeed people from all walks of life,” he said.