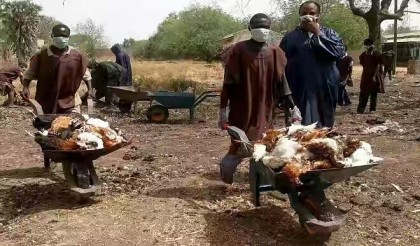 The Poultry Association of Nigeria (PAN) in Plateau has confirmed that 21 farms were affected by avian influenza with no fewer than 70,000 birds destroyed in the state.

The state chairman of PAN, Mr John Dasar , said that the recent outbreak of the disease had seriously affected poultry farming in the state.
He attributed the wide spread of the disease to the non-payment of compensation by government to farmers affected by the outbreak in 2015.

Desrcibing Plateau state as the hub of poultry industry in Nigeria, he said people do come from different parts of the country to Jos to buy eggs and chickens. but the outbreak of avian influenza has done a lot of harm to the industry in the state, he added.

The Chairman said, within three weeks, the industry lost no fewer than 70,000 birds in the state.

He explained that bird flu had remained a major thorn in the flesh of the poultry industry not only in the state but the country in general.
Dasar, however, expressed optimism that the spread of the disease would soon become a thing of the past as government and relevant stakeholders had begun to take measures to forestall further spread.

He said that most farmers were proactive about bio-security measures and had also complied with the directives of government not to sell infected birds to the public.

The chairman called on farmers and the public to report any suspected case of avian influenza to the appropriate authority for prompt action and avoid spread.