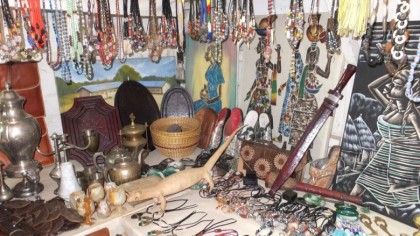 The Minister of Information and Culture, Alhaji Lai Mohammed, Monday paid an unscheduled visit to the Artists’ Village at the National Theatre in Lagos, and promised that everything will be done to provide a conducive environment for Artists to thrive.

”The Artists’ Village is here to stay,” the Minister told the hordes of Artists who welcomed him to the village, which has been in the news in recent times after it was affected by the demolition of shanties within the National Theatre complex.

”We’ll do everything to encourage the Arts. Within our little resources, we’ll make sure that arts thrive,” he said, while assuring that this will be a new era of better rapport between Artists and the Ministry of Information and Culture, as well as with the management of the National Theatre.

Alhaji Mohammed, who toured the village to see the damage done to the work of some of the Artists during the demolition exercise, promised to assist those affected as soon as he received their report detailing the losses they incurred during the demolition, and after studying the report he personally commissioned into the incident.

He said the village, which houses Arts and Dance Studios, among others, was under-developed and that the government will do more to develop and promote the village.

”We will build more on what we met here. Out of the ruins of this village will emerge a befitting Artists Village that will comprise standard studios, dance theatres and stands where artists can exhibit and even sell their works.

”Arts and Culture have placed Nigeria on the world map, perhaps second only to sports. Nigeria’s work of arts are being celebrated globally. It is the responsibility of the government to promote them,” the Minister said.

He urged the Artists to take advantage of the 500-billion-Naira Intervention Fund which the government has set aside in the 2016 budget, with a view to accessing the funds they need to expand the scope of their work.

Alhaji Mohammed also met with Mr. Smart Owie, the artist who was allegedly shot in the leg during the demolition exercise, and secured the assurances of the Lagos State Commissioner of Police to ensure that he is provided with the necessary police report to facilitate his treatment.

The Minister urged the artists to eschew bitterness and refrain from aggravating the situation, while the government awaits their report on the situation.

It was the second time since the incident occurred that the Minister had visited the Artists’ Village.