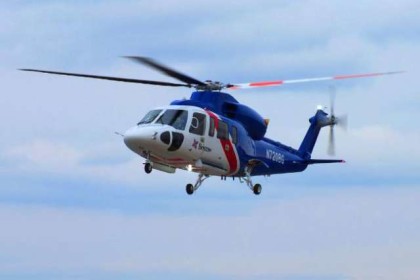 Eleven persons ( 9 passengers and 2 crew members ) were rescued after a Bristow Helicopter, a Sikorsky S-76C++ with regristration No. 5NBJQ crashed in lagos on wednesday.

Bristow Helicopters Nigeria Limited made this known in a statement, describing the incedent has ” water landing”. The chopper was enroute Lagos from an off- shore location in Rivers state. The statement was issued through the company’s Head of External Communications, Julie King.

NAN recalls that the company’s helicopter went down the Lagos Lagoon about six months ago in a smiliar manner in which six out of the 12 on board were unlucky to have lost their lives including the pilot and co-pilot.

Mr Cornelius Onuora, the Media Consultant to Bristow Helicopters, said the incident was a controlled ditching, not a crash. he said it was a an emergency landing of a helicopter on water.

Onuora said the pilot had to land earlier than scheduled because he observed that there was a technical issue with the helicopter.