The Economic and Financial Crimes Commission, EFCC, on Tuesday February 2, 2016 arraigned the duo of Festus Ozemoya and Isaac Ozemoya before Justice G. B. Briki-Okolisi of the State High Court sitting in Effurun, Delta State on a 4-count charge bordering on conspiracy, issuance of dud cheque and obtaining by false pretence to the tune of N17million (seventeen million naira). 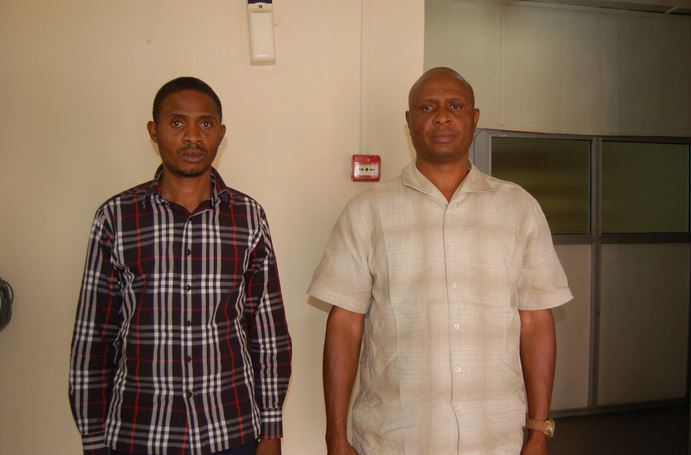 The petitioner, Jane Alabi alleged that, Festus Ozemoya (the 1st accused person) approached her sometime in April, 2014 to solicit funds to finance a project he allegedly secured with Nigerian Petroleum Development Company (NPDC), a subsidiary of the Nigerian National Petroleum Corporation, NNPC, for installation of pumps at Oziegbe Flow Station in Koko, Delta State.
According to Alabi, the accused was advanced the sum of N12million with an agreement that the said sum would be refunded within seven months.
The petitioner further alleged that, the 1st accused person introduced Isaac Ozemoya (the 2nd accused person) to her as his business partner who also secured a contract with NPDC.
Using the same modus operandi, the accused person again swindled the complainant to the tune N12million naira (twelve million naira).
The victim consequently petitioned the EFCC after efforts to get her money refunded were unsuccessful.
One of the counts reads:
“That you, Festus Ozemoya on or about February and April, 2014 at Effurun Judicial Division of the High Court of Delta State with intent to defraud did obtain the sum of Eleven Million Naira (N11,000,000.00) from one Mrs Jane Alabi under a false pretence that the payment was to finance a contract you secured with Nigerian Petroleum Development Company (NPDC) for installation of pumps at  Oziegbe Flow Station in Koko, Delta State which pretext you knew to be false and thereby committed an offence of obtaining by false pretence contrary to Section 1 (1) (a) of the Advance Fee Fraud and Other Related Offences Act, 2006 and punishable under Section 1 (3) of the same Act.”
Another count reads:
“That you, Isaac Ozemoya trading under the name of Eshiemokhai & Sons Company sometime in January, 2015 at Effurun Judicial Division of the High Court of Delta State did Fraudulently issued a Guaranty Trust Bank Plc Cheque No 36836456 of Eshiemokhai & Sons Company dated 31st day of January, 2015 in the sum of N3,000,000.00 (Three Million, Naira) in favour of Mrs Jane Alabi which was to settle your financial obligation with said Mrs. Jane Alabi and when the said cheque was presented for payment, it was dishonored due to insufficient funds standing to your credit and thereby committed an offence contrary to Section 1 (1) (a) and (b) (i) & (ii) of the Dishonored Cheques (Offences) Act Cap D11 of the Revised Edition (Laws of the Federation of Nigeria) 2007.”
They pleaded not guilty to the charge when it was read to them.
In view of their plea, counsel to EFCC, Sadiq Hussaini, urged the court to fix a date to commence trial.
However, the defence counsel, A. U. Shakaru prayed the court to admit the accused persons to bail pending trial.
Justice Briki-Okolosi, granted the defendants bail in the sum of
N5million each, and two sureties in sum of N2.5million each. The sureties must be residents within the Jurisdiction and must have landed properties which must be verified by the court registrar. The sureties must also depose to affidavit of means with two recent passports.
The case has been adjourned to March 16, 2016 for trial while the accused persons are to be remanded in prison custody until their bail conditions are met.
Wilson Uwujaren
Head, Media & Publicity