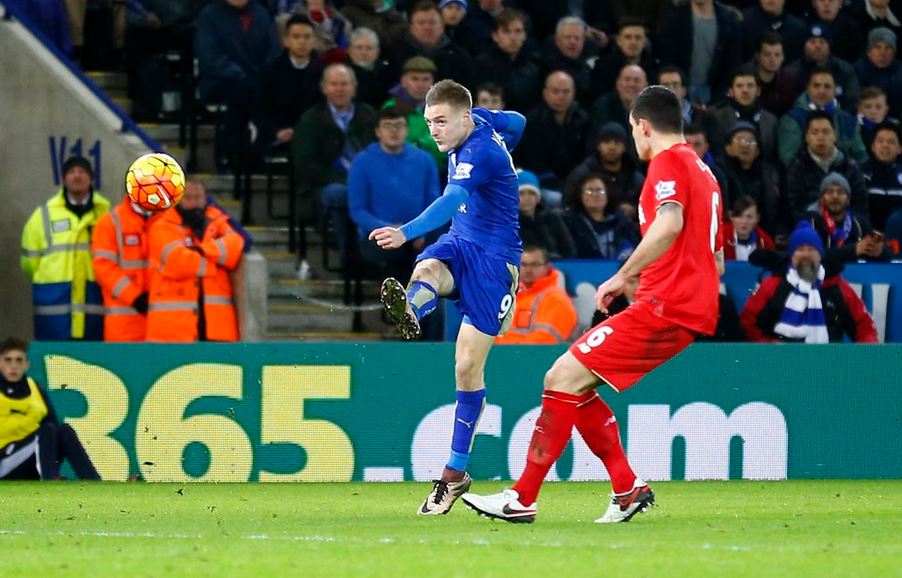 Jamie Vardy produced a moment of magic as his second half brace gave Leicester City a 2-0 win over Liverpool to maintain their three-point lead at the top of the Barclays Premier League.

The division’s top scorer, who now has 18 goals for the season, opened the scoring with a stunning half-volley on the hour mark and hit his second 11 minutes later to leave the Foxes three points ahead of Manchester City, who they visit on Saturday.
Vardy now has 18 league goals this season as Leicester’s shock bid for the title continues, with a crunch clash against second-placed City at the Etihad Stadium next up on Saturday.

Liverpool goalkeeper Simon Mignolet had already kept the visitors in the match by making two excellent saves in the first half but Jurgen Klopp’s team have now only won one of their last five league matches – conceding 12 goals in the process.

Leicester made no alterations to their team, while there were eight Liverpool alterations from the side that played West Ham United in the FA Cup on Saturday, with captain Jordan Henderson fit to start.

The visitors had most of the first half possession, but Leicester came closest to scoring on two occasions. First, a swift counter-attack saw Shinji Okazaki find Vardy before getting on the end of the England striker’s cross to head powerfully at goal from close range, but Mignolet got down low to push the ball on to the bar.

Mignolet was then at it again, this time to deny Riyad Mahrez’s first-time effort from 25 yards after Vardy was tackled by Dejan Lovren.

Emre Can arrowed a shot just wide from 12 yards after a neat passing move and Kasper Schmeichel had to react quickly at his near post to keep out Alberto Moreno after the break.

It was a piece of individual brilliance that broke the deadlock when a hopeful long pass from Mahrez found Vardy’s run in a seemingly unthreatening position close towards the right channel outside the area.

Vardy, though, displayed perfect technique to send an outstanding looping half-volley over Mignolet from 25 yards.

In case you missed the Vardy goal here it is !https://t.co/pBkBzb2mHf”

Okazaki had a penalty claim denied by referee Andre Marriner after he appeared to be brought down by Mamadou Sakho in the box, but the hosts soon got over that when Vardy doubled the lead.

After Sakho failed to head clear, Okazaki’s shot deflected into the path of Vardy, who made no mistake with a convincing left-footed finish to seal another impressive victory for Claudio Ranieri’s title challengers.

Leicester manager Claudio Ranieri: “Amazing. The first goal was unbelievable. We played very well and pressed a lot against a very good team.

“Jamie is very fast and can create a lot but it was unbelievable how Mahrez found him and how he had the time to see the keeper out of the goal and scored a fantastic goal.

“The team is in good condition. Now it is important to recover the energy because we have to run a lot against Manchester City. We are free of pressure. The players have a good feeling.”

Liverpool manager Jurgen Klopp: “I’m not too fine with our game today. We could have played much better.

“We created half chances but not real chances. It was a world-class goal from Jamie Vardy. Today would have been a good day to show we are ready for this. I need a few more seconds to calm down. I have to watch it again.”