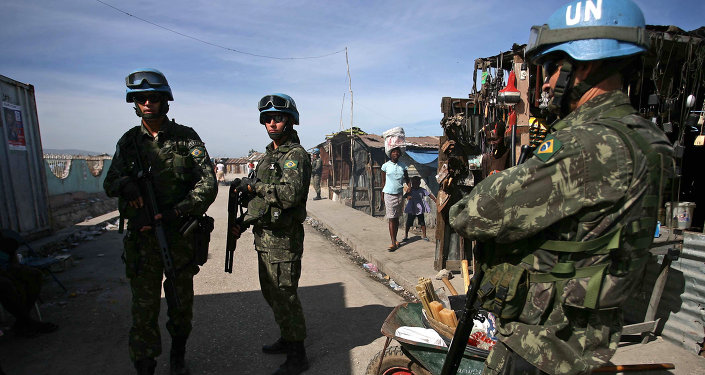 The UN peacekeeping mission for Central African Republic (CAR) said it has identified seven new cases of sexual abuse by its troops, including women and girls that the Human Rights Watch (HRW) says were raped or gang raped.

It said on Friday that the latest cases which involved at least five children came on top of more than 20 allegations of sexual abuse and exploitation by peacekeepers in the country last year.

MINUSCA Head, Parfait Onanga-Anyanga, said during a visit to Bambari (CAR) that troops from France and Georgia involved in restoring order in CAR are also accused of sexually abusing children.

He noted that Human Rights Watch accused soldiers from Congo Republic and Democratic Republic of Congo of raping or sexually exploiting eight women and girls between October and December 2015 near Bambari airport.

Onanga-Anyanga said the victims were among the nearly 1 million CAR displaced during three years of violence between Christian and Muslim militias and were at the time living in a nearby temporary camp.

He narrated the story of a 14-year-old girl that said that she was dragged into a patch of tall grass by two armed peacekeepers, where one restrained her arms as the other raped her.

He said MINUSCA, has conducted its own initial probe into the incidents, and it has confined 120 soldiers from the Republic of Congo to barracks and would repatriate them once an investigation is complete.

Troops from Congo Republic have in the past been accused of involvement in up to 18 alleged enforced disappearances in the country and have not yet been sanctioned.
Meanwhile, Congo Republic, whose President Denis Sassou Nguesso has acted as a mediator in the Central African conflict, issued a statement on Thursday saying the government will launch an investigation into the new rape allegations.

He said it was unfortunate that under the current system, the UN can investigate crimes and send peacekeepers hoe but has no power to prosecute individuals.

Anneke Woudenberg, HRW’s Deputy Africa Director, said the fundamental changes to agreements with troop-contributing countries were necessary to improve accountability.
She said the UN should be able to step in and take a stand, noting that peacekeepers are getting away with rape and killings.