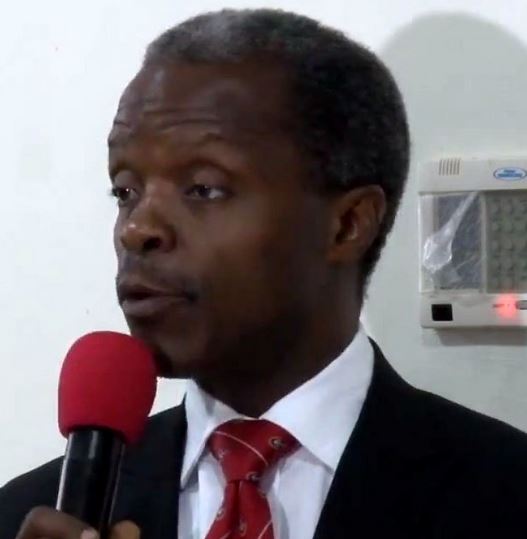 A critical pillar of the Buhari presidency is transparency, especially in the extractive industry, according to Vice President Prof. Yemi Osinbajo, SAN.
According to him, “it is important for us that we handle our resources with transparency and good governance,” he told a delegation of the global body-Extractive Industries Transparency Initiative, EITI, earlier today during a meeting at the Presidential Villa. The Minister of State for Budget & Planning, Mrs Zainab Shamsuna Ahmed, the former Executive Secretary of the Nigeria Extractive Industries Transparency Initiative, NEITI, was also in attendance.
“One of the objectives that we have set for ourselves is to ensure that we are transparent and able to handle our resources well”,  the VP said, stressing that “if we (as a nation) had handled our resources better, with transparency, and good governance, we would not find ourselves were we are now.”
He said as a nation, “we have learnt our lesson,” declaring that going forward the government will work transparently and generate more revenues.
He stated that as a government, the Buhari administration has determined to work with the Nigeria Extractive Industry and Transparency Initiative (NEITI) “to ensure good governance and look at how we can generate revenues and keep proper accounts.”
On the issue of the Petroleum Industry Bill (PIB), Prof. Osinbajo assured that government is working with the National Assembly to get the PIB passed into law, stating “we want to see what will come out of the bill because this will give some regulatory direction and we are working very closely to get that done.”
Earlier, the in-coming global Chairman of EITI, Mr. Fredrik Reinfeldt, a former Prime Minister of Sweden commended Nigeria’s committed to the EITI process, saying he has been following  the restructuring of the NNPC, and other developments in the oil sector. On the delegation were also the Acting Executive Secretary of the NEITI, Mr. Orji Ogbonnaya Orji and the Deputy Head of the EITI global, Mr. Eddie Rich.
Also today the Vice President also received delegations from Nigeria Leadership Initiative, NLI class of 2015 and the Nigerian Institute of Legislative Studies, NILS.
He told the delegation from the NLI that considering the extent of effort required to address the socio-economic impact of the insurgency in the Northeast, Nigerians with the required capacity should partner with different agencies of government to rehabilitate and rebuild the area.
“It would be useful to work with the Presidential Committee on Northeast Initiative to achieve some of its objectives,” the Vice President told the class led by the Minister of Industry, Trade and Investments, Dr. Okey Enelamah and Central Bank Deputy Governor, Mrs Sarah Alade.
While commending the class for its work, he said the group should go further and play a more active role beyond making a documentary submission. Observing the sheer scale of what has gone wrong, Prof Osinbajo stated that there is quite a lot to be done and lots of effort are underway.
The leader of the delegation, Dr. Okey Enelamah informed the Vice President about the proposed documentary project of the group, which focuses on the humanitarian crisis in the North East is a collective issue rather than government concern alone.
In his meeting with the NILS, Vice President Osinbajo expressed government readiness to support the work of the Institute, stating that the Institute plays a prominent role in the legislative arm of government. In his remarks, the leader of the delegation, the Senate Committee Chairman on Water Resources and also a member of the Governing Council of NILS, Senator Muhammad Ubali Shitu, expressed their support for the change agenda of the Buhari’s Administration and praised the Vice President’s response to support the Institute.
Laolu Akande
Senior Special Assistant-Media & Publicity
In the Office of the Vice President.
February 8, 2016