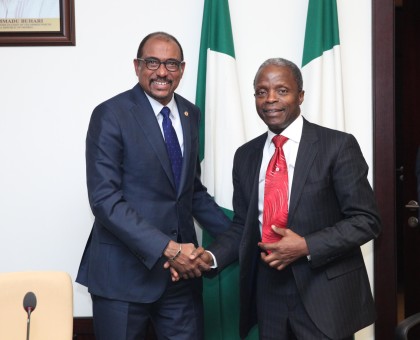 Determined to ensure healthcare access to all Nigerians, the Buhari administration will put in place effective primary healthcare centers across the country, while also collaborating with international agencies to end HIV/AIDS epidemic in the country.

The indications were given today by the Vice President, Prof. Yemi Osinbajo, SAN, while receiving a delegation of the United Nations Programme on HIV/AIDS, UNAIDS, led by its Executive Director, Mr. Michel Sidibe at the Presidential Villa.

According to the Vice President, access to healthcare is “a poverty issue, we must put it in that perspective.” He explained that it was for the same reasons that the Buhari administration put the “half a trillion Naira in the 2016 budget, the largest single budgetary item of any government ever on social investments programmes,” that address poverty.

The Vice President was referring to the 6 social investment plans of the Buhari presidency which are:

*Creation of 500,000 teaching jobs for unemployed graduates
*370,000 youths to be taken through vocational training and skills acquisition and would be paid while doing so
*Conditional Cash Transfer programme where one million extremely poor Nigerians would be paid N5000 per month in 2016
*Homegrown School Feeding programme where the federal government provides one-meal-a-day to primary school pupils across the country
*Free Education for tertiary education students in Science, Technology, Engineering and Mathematics
*A one-time N60,000 loan to market women, artisans and traders through a Micro Credit scheme using the Bank of Industry.

All the programmes have been provided for in the 2016 budget, the Vice President restated, and they are means of reducing poverty and vulnerabilities. He stated that access to treatment by patients of HIV/AIDS as in other diseases is an equality issue “because the vast majority of people who need help are those who can’t afford it.”

He said the federal government will ramp up funding for healthcare in the country and work with the UN to eliminate Mother-to-Child transmission of HIV/AIDS, expanding treatment for patients and spurring local manufacture of the Anti retroviral drugs, the three major issues the UNAIDS director tabled before him at the meeting.

Laolu Akande
Senior Special Assistant-Media & Publicity
In the Office of the Vice President.