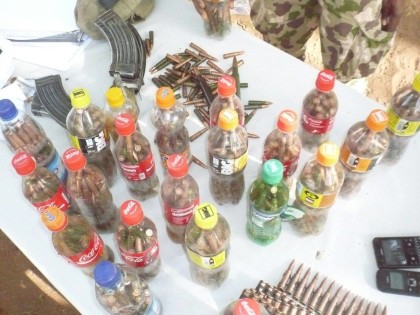 It has come to the knowledge of the Nigerian Army that while concerted efforts are being made to finally clear all remnants of Boko Haram terrorists in the North East in particular and the country generally, some unscrupulous elements in the society have been thwarting that effort for pecuniary gains. They engage in all manners of illegal commercial activities such as trading and smuggling especially during late hours, all aimed at sustaining terrorism and insurgency. This is more prevalent in some towns and villages within the North East especially in Borno and Yobe States. The unpatriotic and selfish elements have clandestinely been aiding the terrorists with logistics and other supplies, through smuggling and other forms of illicit trading, thus sustaining them, while the merchants of death make money out of it.

Consequently, the Nigerian military and indeed the Nigerian Army is highly concerned with these unpatriotic acts. The Nigerian Army is therefore taking some drastic steps to curtail this illicit trading with the terrorists. From now on, some markets identified to be engaging in this illegal trade with the adversary in Borno and Yobe States will be closed. Any breach of that would be dealt with accordingly. The General Officers Commanding and other commanders have been directed accordingly. We implore for public’s kind support and understanding as we take these drastic measures to enable us decisively deal with the terrorists and saboteurs.

Ladies and gentlemen, the Nigerian Army has been recording tremendous successes in the fight against terrorists and insurgency as follows:
Troops of 7 Brigade Quick Reaction Force (QRF), Multinational Joint Task Force, yesterday inflicted casualties on Boko Haram terrorists, thus causing a major setback to the insurgents. This feat was achieved when the troops staged an ambush against the terrorists at Kekeno, Kukawa Local Government Area. During the operation, the gallant troops killed 5 suspected Boko Haram terrorists, recovered one Toyota Buffalo vehicle, 3 AK-47 rifles, 2 knives, a horse and other locally fabricated weapons. The insurgents were believed to be on a retaliatory mission following the killing of a suspected Boko Haram Ameer during an ambush by our troops at Kekeno.

In another development, troops of 118 Task Force Battalion patrolling Mile 90-Kekeno general area, have killed one suspected Boko Haram terrorist and captured 2 other insurgents. Similarly, troops of Army Headquarters Special Forces on patrol to Yale came across Boko Haram terrorists camp at Bulagana, cleared the camp and rescued 40 civilians held hostage. Unfortunately, 1 soldier sustained gunshot wounds during the operation. He has since been evacuated and is responding to treatment.

This unfortunate incident notwithstanding, troops morale remains high as they continue to dominate the general area with aggressive raids, ambushes and patrols to clear the remnants of the terrorists hibernating in the area.
The attention of the Nigerian Army has also been drawn to a set of 250 protesting dismissed soldiers in Nigerian Union of journalists (NUJ) Secretariat, Kaduna pleading through the media to be reabsorbed back again into the Nigerian Army.

The protesting soldiers were those soldiers dismissed last week by the Nigerian Army over gross acts of indiscipline, cowardice and absence without leave. They were part of the 2,023 dismissed soldiers last year that were earlier reinstated back into the Service by the present Chief of Army Staff. However these set of soldiers (the 205) absconded for more than one week when they were told that they were to move to North East on the 6th of January 2016. They started coming back when they realised that others were moved to units other than the theatre of operations in the North East. Please note that all efforts were made to make all the reinstated soldiers comfortable and integrate them back into the system. The protesting soldiers are the few who are recalcitrant to military duties and discipline. They are simply not interested in army job but want to earn salary. No one should listen to them as they are not patriotic at all.

It should be noted that the Nigerian Army has been tolerant and patient with their acts of indiscipline and unprofessional conduct. This was based on the understanding of their circumstances and conditions. Efforts have been made to retrain them, integrate and give them sense of belonging. However the attitude of some of them has left so much to be desired and would not be tolerated anymore hence their dismissal from Service. The Nigerian Army thrives on discipline, loyalty and good conduct and if anyone could not measure up to expectation or live by those tenets, he would not be allowed to remain in the system.
Kindly disseminate this information to the public through your medium.
Thank you very much for your kind and usual cooperation.