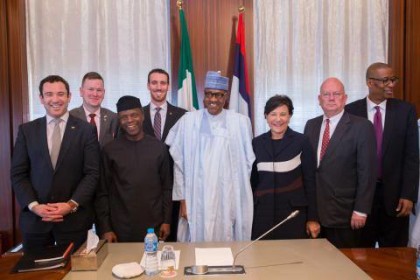 One of the measures the Federal Government would undertake to address the deplorable conditions of border communities in the country is to engage State Governments in tackling the challenges, according to Vice President Prof. Yemi Osinbajo, SAN.
According to him, “our border communities are in a state of despair, we need to pay a lot attention to them.”
Prof. Osinbajo however observed that “without the states we will not be able to achieve much either with the border communities or the boundary commission”, offering to make presentation to the Govovernors at the National Economic Council (NEC), in order to highlight the enormity of the challenges.
Speaking today when he received the Senate Committee on States and Local Governments led  by its Chairman, Senator Abdullahi Gumel and the Chief Executives of Border Communities Development Agency and the National Boundary Commission at the House, Abuja, the Vice President said “border communities are places where you need to ensure are stable.” He noted that phased approach will be taken in solving the problems, considering government’s lean resources.
He also noted that roads, markets, schools and other social basic infrastructure must be provided at the border communities, to avoid intrusion by foreigners.
Earlier, the Chairman, Senate Committee on State and Local Government, Senator Abdullahi Gumel, told the Vice President that they were at the State House to brief him on the result of their oversight conducted on some of the border communities with the finding that facilities at the border communities are in the state of disrepair.
Both the Director General, National Boundary Commission, Dr. Mohammed Ahmed and Executive Secretary, Border Communities Development Agency, Engr, Numoipre Wills attended the meeting.
LAOLU AKANDE
SENIOR SPECIAL ASSISTANT (MEDIA AND PUBLICITY) IN THE
OFFICE OF THE VICE PRESIDENT