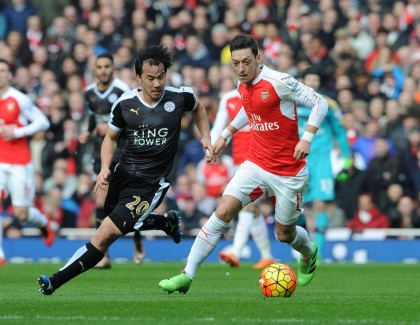 Arsenal were in Premier League action against Leicester City on Super Sunday fixture. Danny Welbeck’s last-gasp winner helped Arsenal beat Leicester City to close the gap on the league leaders to two points. Could this be the turning point on title challenge.

In the Early stages of the game Arsenal had clear cut chances, they cut Leicester open down the right.

As half-time approach Leicester went ahead, Vardy luring Nacho Monreal into a challenge and then tumbling to the ground before picking himself up and slotting his 19th goal of the season past Arsenal goalkepper Petr Cech.

More trouble for Arsenal as Laurent Koscielny was replaced during half time with Calum Chambers coming into the fray as he was forced off with a dead leg.

Then come on substitute Theo Walcott who set up a frantic final 20 minutes with a side-foot finish from Olivier Giroud’s superb knockdown. 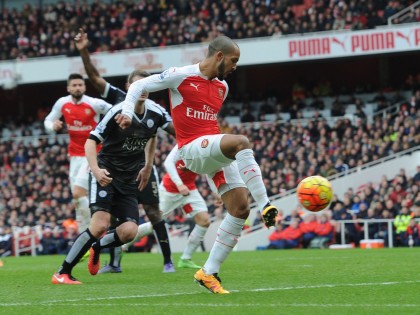 The Foxes were playing to hold Gunners out for a vital draw as the thrilling game went into injury time, despite being reduced to 10 men after Danny Simpson was sent off for a second unnecessary challenge on Giroud to earn a second yellow card early in the second half.

Deep into the 4mins added time, Danny Welbeck rushed in to meet Ozil’s free-kick with an unerring downward header, eclipsing Leicester’s fairytale with one of his own. 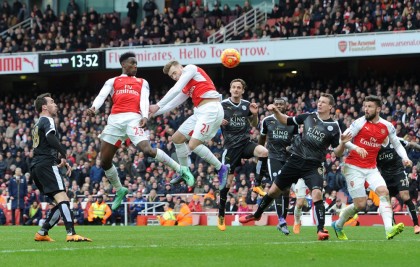 Leicester City now have two weeks to regain their strength before resuming their improbable title bid at home to Norwich City, while Gunners have a big task and must prepare for contests with Hull City and then Barcelona in Champions League round of 16.

Wenger said “We came out of a bad spell after four games without a win – we now win two games on the bounce. To still be in the fight after that spell is good and hopefully the result strengthens the belief of the team. 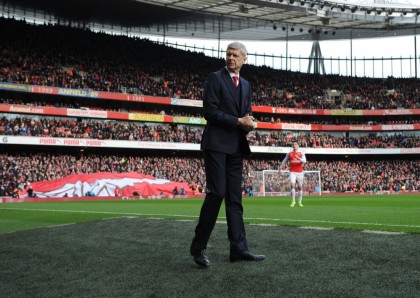 “We have a good chance. It was a pivotal moment because the mathematics meant it could be eight points or it could be two points and that is a great change.” Arsene.

Ranieri: “We want to fight match after match. We know the matches are hard. Now there are so many teams who want to win the league like Arsenal or want to avoid being relegated. Every match is different and tough. 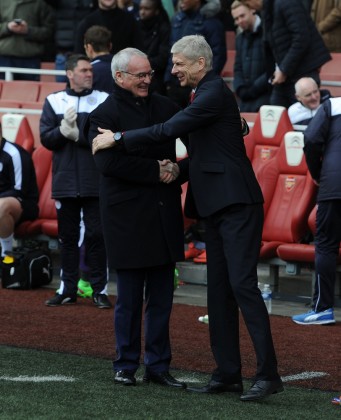 “It was a fantastic match, very fast. We know Arsenal are a fantastic team, they move the ball very quickly and are full of skill, but we had to concentrate.

“We had chance after chance. I was a bit [annoyed] that I didn’t score the first opportunity that came to me so I just tried to make amends and thankfully got the goal at the end”. Welbeck

Arsenal are the only team to have beaten Leicester City twice this season and The Foxes have lost only 3 matches in the Premier League after 26 matches played.

The match ended Arsenal 2-1 Leicester City at the Emirates, home turf for Arsenal. 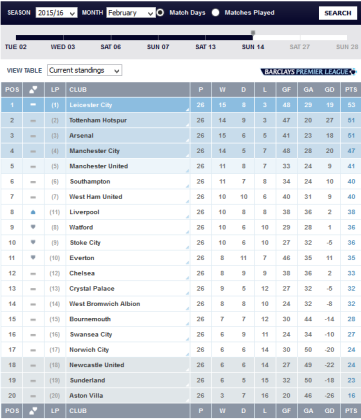