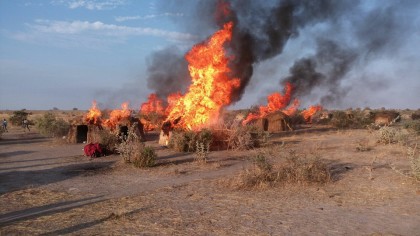 Troops of Nigerian Army in various sectors in Operation LAFIYA DOLE have been carrying out raids, patrols, cordon and search operations in a bid to clear remnants of Boko Haram terrorists in their respective areas of operations.

According to Colonel Sani Kukasheka Usman, Acting Director Army Public Relations, said one of the patrol teams of 254 Task Force Battalion carried out clearance operation at Kubwa village, Borno State in which they arrested 2 suspected Boko Haram terrorists hiding among the community.

Also another patrol team of the same unit, carried out clearance operation at Yakshari village, off Wajiroko along Ajigin-Talala road and proceeded to Korode. It was here also that some suspected Boko Haram elements on sighting the troops, ran and abandoned 6 motorcycles and beans looted from the inhabitants of the area.

He said the same team also recovered 21 motorcycles and Boko Haram terrorists flag at Korode abandoned by the fleeing terrorists. Similarly, a civilian vehicle encountered an Improvised Explosive Device (IED) at the area which badly affected it. The troops also discovered another IED at Mauvi village which was safely detonated.

In the encounter, 5 Boko Haram terrorists were killed, an AK-47 rifle, 10 motorcycles and 1 logistic truck belonging to the terrorists were recovered. The troops also rescued 350 people held hostages by the terrorists. Among those rescued were 5 girls abducted from Cameroon.

In order to boost troops morale and to see things for himself, the General Officer Commanding 7 Division, Brigadier General VO Ezugwu visited 26 Task force Brigade and commended troops of 121 Task Force Battalion for the successful joint clearance operations at Kirawa and Ngoshe with Cameroonian forces.