Lawyer Calls For Use of Whistle-Blowers To Fight Corruption 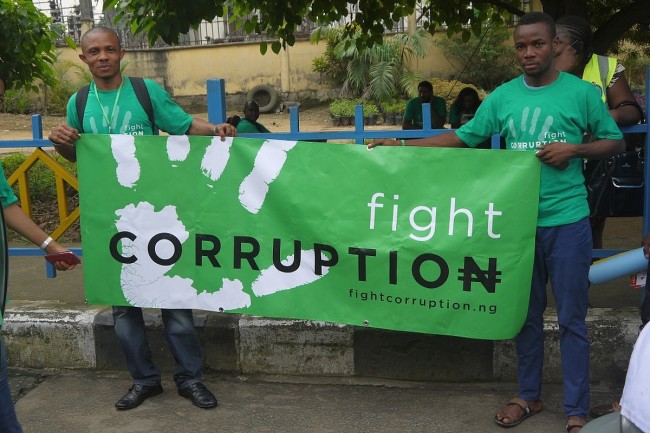 Some youths holding a banner to show support for the fight against corruption (Photo: Internet)

Mr Olajide Olakanmi, the Rector of the Pan-African Institute of Para-Legal Studies, says whistle-blowers can be effective in fighting corruption if personal relationship is separated from official position.

Olakanmi said this in an interview with the News Agency of Nigeria (NAN) on Friday in Abuja.

According to him, whistle-blowers now occupy strategic position in the fight against corrupt practices endemic in the Nigeria’s polity.

He said that while in other climes especially in Europe, whistle-blowers have taken a very big tog; “they are used extensively in exposing corruption, managing crisis and issues that would have degenerated into major crisis could be managed by whistle-blowers” he added.

Olakanmi expressed regret that whistle-blowers are not adequately protected, saying this class of Nigerians need to give important information about underhand dealings to which they are privy.

He noted that evidence-based fight against graft will go a long way towards nipping corruption in the bud.

The rector maintained that mere rumours should not be condoned if the country must win the war against corruption.

He explained that in the advanced countries the whistle-blowers’ actions are backed by empirical evidence, saying they are both “strategic and important” if only “we are able to manage them very well in Nigeria”.