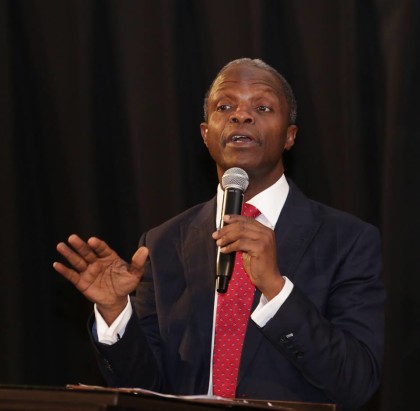 In a clarion call laced with insights and aimed at reorienting a new set of leadership elite in the country, Vice President, Prof. Yemi Osinbajo, SAN, has advocated for what he describes as “a new tribe” of Nigerians to fight and dismantle the corrupted systems in the nation’s private and public sectors.

According to him, there is now an urgent need to populate the country with this new tribe of Nigerians.

In his words: “we need a new tribe of men and women of all faiths, tribes and ethnicities. Committed to a country run on high values of integrity, hard-work, justice and love for the country.”

Continuing Prof. Osinbajo said these will be “a tribe of men and women who are prepared to make the sacrifices and self-constraints that are crucial to building a strong society; who are prepared to stick together, fight corruption side by side, and insist on justice even when our friends are at the receiving end.”

Conversely, Prof. Osinbajo noted that “when you look at any list of alleged perpetrators of a heinous case of corruption, all tribes, ethnicities and religions are well represented. In other words, high level corruption knows no religion or ethnicity.”

He went on explaining that such perpetrators and conspirators “are in governments, the legislature, the judiciary and the press. They are united, they protect each other, they fight for each other and they are prepared to go down together.”

According to him, “they are one tribe, indivisible regardless of diversity. It is this tribe that confuse the arguments for change in society.”

The Vice President spoke Saturday evening in Lagos on the theme “Change Agents in Nation-Building” at the annual dinner of the Apostles In The Market Place, AiMP, of which he is a member and where he was the keynote speaker at an event attended by eminent Nigerians including Dr. Christopher Kolade, Nigerian professionals and religious leaders.

Dwelling on the need and calling for the new tribe consisting of professionals, businessmen, politicians, religious leaders and all others who believe that a new Nigeria is possible, the Vice President disclosed how the President and himself have been working together to get the right people for tasks.

“I have had several long discussions with President Buhari, the key issue always is finding the right persons for any task. A tough task indeed in a corrupted system.”

He stated that the corrupted system is “one where the norm is corrupt behaviour across all arms of formal systems of governance. In such a system the private sector is a strong collaborator. The fight against corruption is then a fight against the system.”

Prof. Osinbajo added that such a corrupt system “can hardly deliver public goods. How many new roads has the Federal Government of Nigeria managed to build in 10 years? Where has the billions of dollars in the days of $100 oil gone?

Besides, the Vice President added that “the shocking thefts of funds meant to procure arms to defend the nation demonstrates the moral ambivalence that pervades our system. That system needs to be dismantled if the nation is to progress.”

According to him, “Nigeria’s greatest battle is the one to bring integrity and accountability to public service and the private sector. This requires a new way of thinking, a new leadership corp, a new tribe. The challenge today for us all, friends and colleagues is to populate that new tribe.”

Entitled “A New Tribe”, Prof. Osinbajo’s speech drew the fervent response of Kolade who sat through the delivery and also spoke at the well-attended event noting that the change that Nigeria needs is that which starts “in us as individuals.”

He said the new tribe the VP called for must be made up of Nigerians who accept and believe in a “society where good things are the norm,” and that such acceptance and belief is what qualifies people to belong to the new tribe.

Dr. Kolade added that the new tribe of Nigerians are those who want to tell the truth and who want the truth.

He concluded by thanking the Vice President “for stimulating our thinking tonight with this idea. We should put ourselves in the humble position of those who want to learn. I have known for a long time that I cannot listen to the Vice President and not learn a new thing.”