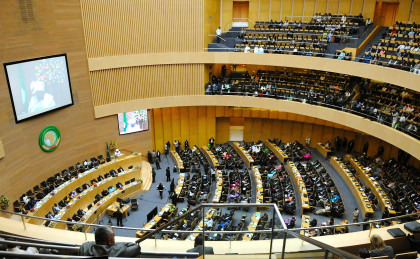 An Africa Union (AU) delegation, led by H.E. Mr. Erastus Mwencha, Deputy Chairperson of the African Union Commission (AUC), is in Port Louis to meet with the government of the Islamic Republic of Mauritius in preparation for the African Economic Platform. The Platform will be launched in Mauritius on 14 – 16 April, 2016.

Expected to participate at the first African Economic Platform are the public sector, to be led by Heads of State and Government; the African private sector led by captains of commerce and industries; as well as the African higher education sector. This is a strategic approach by the African Union to bring together these three sectors to engage in discussions, ensure cooperation and foster collaboration deemed critical for the continent’s growth and economic transformation.

The inaugural platform will tackle amongst other issues the potential for the Continental Free Trade Area to boost intra-African trade and investments; the role of governments and the private sector in industrialization and an African commodity sector; bridging the skills deficit in the continent, measures to speed up free movement of people on the continent and the challenge of building a competitive African business and private sector in a fast changing continent and world.

“The ultimate aim of the African Economic Platform (AEP) is to catalyze economic transformation on the continent by seeking solutions to, among other things, economic integration, promoting greater intra-African trade, skills development and capacity building.” The AU Commission Chairperson said when making the announcement. She added that the Platform will also help to tackle environmental and policy limitations, promote intra-African trade and increase Africa’s share of global trade.

Describing why the AU was focused on bringing these three sectors together, Dr. Dlamini Zuma said: “The private sector, because of the role it can, and should play in investment, industrialisation and intra-African trade; the higher education sector because of the significance of skills development, research and innovation; and government to ensure that policy, fiscal and macro-economic environments are conducive to the transformation of African economies, towards the Africa We Want in 2063”.

The Agenda 2063 aspiration on inclusive growth in Africa envisions a prosperous continent with the means and resources to drive its own development. The African Economic Platform will contribute towards greater unity of purpose towards economic growth on the continent and increase Africa’s share of world trade, thereby improving the livelihoods of ordinary people.

The annual platform is the outcome of a 2014 Ministerial retreat of the AU Executive Council, following extensive consultations with AU Member States.