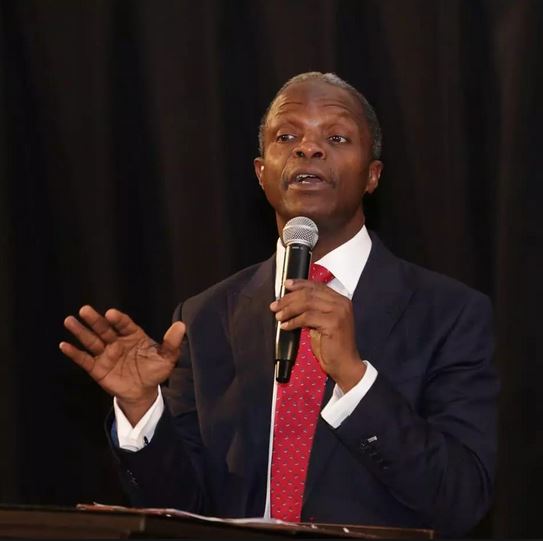 Africa must put the days where it speaks with discordant and weaker voices on global issues behind it and begin to pursue a common African position, says President Muhammadu Buhari
According to him Africa must change the story of cities and settlement from one of chaos and slum to one of positive planning, tranquility and environmental sustainability.
More so, he added that by doing so and with real lessons from other parts of the world, Africa must remain conscious of it’s commonality and peculiarities and use them to propel our urban agenda.
Speaking today at the opening ceremony of the Africa Regional Meeting on Habitat III,at the International Conference Centre in Abuja, Vice President Prof. YemiOsinbajo, SAN speaking on behalf of President Buhari stated that Nigeria welcomes a common African position on urbanisation because “it takes account of our joint efforts over the last decade”.
President Buhari observed that the African Regional Meeting with the theme ‘African Priorities For The New Urban Agenda’ organised by the United Nations Conference on Housing and Sustainable Urban Development (Habitat III) is timely for Africa to pursue a new urban agenda which addresses some of its peculiar challenges.
He said the kind of urbanization which Africa should have must accordingly take place in a manner that simultaneously promotes growth and social inclusion, noting “that despite having the fastest rate of urbanization in the world at over 4.5 per cent a year, Africa is yet to be on a sustainable path to achieving these twin objectives of economic growth and social inclusion”.
Analyzing the root causes of current urbanization challenges in Africa, the President explained that “Africa is one of the continents with some of the high rates of inequalities in the world, fueled by high population growth, unequal access to healthcare, education, opportunities for income and decent life.” He then submitted that the “increasing number of slums in Africa is a depressing manifestation of these inequalities”
“These challenges are related to poor planning, policy gaps and policy inadequacies, budgetary inadequacies. Poor planning of urban areas that can be attributable to limited capacities, insufficient resources and outdated data”, he observed.
He explained that the prevailing dehumanizing state of Africa’s urban settlements “has led to migration at a time of resource constraints which has resulted in population explosion and shortage of houses,that has pushed people living in cities to build houses in places which makes them vulnerable to natural disasters; causing significant economic and social risks.”
President Buhari noted that forced migration caused by terrorists’ attacks has led to secondary towns especially in the Sahel zone being pressured to accommodate citizens who flee their villages and homesteads and has also caused loss of lives, destruction of properties and even insecurity and poverty.
Nigeria faced with its own challenges in this area, he said “is deploying substantial human and material resources to address the situation, while appreciating the support of partners at home and abroad that are collaborating with the Federal Government.
President Muhammadu Buhari counseled that despite the constraints of resources, “we should not expect that our core resources to propel our development should come from our development partners, no matter how benign.” He urged other African countries to emulate Nigeria and Ghana that have committed resources to support the Urban Agenda under the UN Habitat Agenda towards accelerating the process of the continent’s urbanization drive.
Earlier in his remarks, the Secretary-General, UN Conference on Housing and Sustainable Urban Development, Dr Joan Clos disclosed that the primary objective of the regional meeting isto provide Africa the opportunity to address challenges it’s facing in the urban centers.
Also speaking at the ceremony, the Minister of Power, Works and Housing who is also Chairperson of the Africa Regional Meeting, Mr. Babatunde Raji Fashola praised the renaissance of African delegates’ response to the challenges of urbanization, urging them “to utilize the commonality of purpose to identify the peculiarities of human settlement across the continent.”
The Minister further urged delegates to develop common strategies on how to manage the challenge of urbanization and to explore the opportunities latent in the global challenges”.
Other speakers at the opening session include Mr. Mohammed Bello, Minister of Federal Capital Territory; Dr Aisha L. Abdullahi, Commissioner for Political Affairs, African Union Commission; Mr. Mbogo Ngabo Seli, Minister of Lands, Urbanism and Habitat, Chad; and Mr. Diene Farba Sarr, Minister of Urban Renewal Housing and Living Conditions, Senegal.
Laolu Akande
Senior Special Assistant (Media & Publicity)
In The Office of the Vice President
25th February, 2016