The 2016 Oscars have come to an end, with “Spotlight” earning the top prize.

“The Revenant’s” Alejandro G. Iñárritu won in the directing category for the second year in a row, after taking home the prize last year for “Birdman.”

Leonardo DiCaprio picked up his first Academy Award in the lead acting category for “The Revenant,” while the lead actress trophy went to Brie Larson for her work in “Room.” 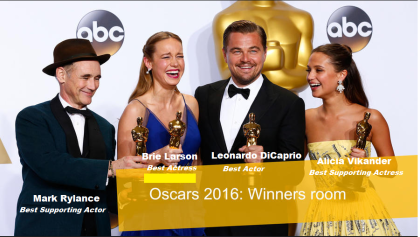 The other films nominated for best picture were “The Big Short,” “Bridge of Spies,” “Brooklyn,” “The Martian,” “Room” and “Spotlight.”

The complete list of winners and nominees is below.

“Anomalisa”
“The Boy and the World”
WINNER: “Inside Out”
“Shaun the Sheep Movie”
“When Marnie Was There”

WINNER: “A Girl in the River: The Price of Forgiveness”
“Body Team 12”
“Chau, Beyond the Lines”
“Claude Lanzmann: Spectres of the Shoah”
“Last Day of Freedom”

See Leonardo DiCaprio, Charlize Theron, Kerry Washington and others as they walk the red carpet at the 2016 Oscars.