President of the Senate, Dr. Abubakar Bukola Saraki and his colleagues in both chambers of the National Assembly were yesterday informed by a team of consultants under the auspices of the Department for International Development (DFID) that 54 of the country’s existing laws have to be either amended or repealed if the country is to make progress in her quest to attract investors and become business friendly. 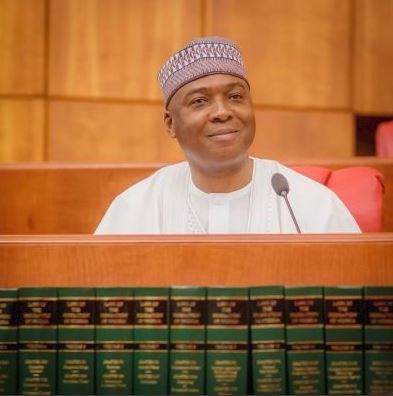 The experts spoke while presenting the 168 page report titled “Comprehensive Review of the Institutional Regulatory, Legislative and Associated Instruments Affecting Businesses in Nigeria” as Saraki also said the present economic challenge facing the country presents an opportunity for her leaders to show leadership, courage and ingenuity.

The Senate President said the nation should use the present economic situation to set the stage for a post-oil era in which the private sector will steer the ship of the economy while government provides the enabling environment.

“The National Assembly through the our legislative agenda seized on the moment to chart a new course for the nation’s economy. The legislative agenda we have adopted is one framed largely around good governance, accountability, opening up of the economy for greater investment, ease of doing business and security of lives and property”, he said.

He added that the 8th National Assembly would give priority to the amendment of obsolete laws and since some of the affected laws require constitutional amendment, the planned process would be expedited to ensure that all stakeholders concerned make the changes happen as soon as possible.

Saraki said the collaboration with the private sectors, development partners, professional groups like the Nigeria Bar Association (NBA) as well as the academia in the on-going process to review laws affecting doing business will give birth to a new business environment that will boost the economy, solve the problem of unemployment, curb social vices and restore our national values and pride.

He stressed that the Senate and the House of Representatives are on the same page with President Muhammed Buhari’s policy on diversification of economy, “Our President has laid out a vision to fully diversify the economy beyond oil and has been committed to the actualization f the project.

“The overarching objective of the agenda targets private sector investment and business development as a major plank of the plan. This is because of our belief in the ingenuity, creativity, entrepreneurship of our people and that in order to create jobs, give our people better opportunities, the private sector remains our best option.

“This is at the heart of the clamour for diversification; from agriculture business support, to credit, economic reform bills, to MSMEs, taxation, conflict resolution, regulatory reform bills, our agenda is firmly rooted on increased participation, diversification and capital formation”. Saraki assured.

The Senate President continued that the collaborative efforts between the National Assembly, DFID’ ENABLE program and GEM3, with strong participation of the organized private sector led by the Nigeria Economic Summit Group (NESG) represents a first of its kind adding that the Senate has offered to the nation a detailed plan, a cohesive legislative agenda for renewed national cohesion and development.

The leader of the team of experts sponsored by DFID, Prof. Paul Idornigie said apart from 54 laws reviewed, they also did a comprehensive analysis of 50 other bills pending before the two chambers of the National Assembly.

Idornigie said the priority rating list will help the legislature to focus on some areas that require urgent intervention and recommended nine bills that if passed into law in the life of the 8th National Assembly, it would have been deemed to have comprehensively reformed the business environment.

The team also recommended the establishment of a Federal Legislative Clearing House to be scrutinizing and reviewing bills before they are presented to the respective legislative chambers for first reading.

“One principle we believe the National Assembly in considering the bills before it is the need to avoid the setting up of multiple agencies with overlapping or competing mandates. Consequently, there is need to follow a cost benefit approach in deciding when and where a new agency is required”, he said.

NEWER POSTFG Deploys 3,000 Civil Defence Corps Officers To Mining Sites Across The Country
OLDER POSTMinister of Interior Assured Nigerian Refugees in Cameroon of Government Plans to Return Then to Their Communities in Nigeria