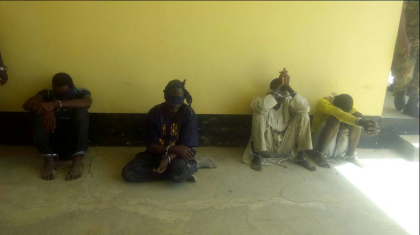 The headquarters of 33 Artillery Brigade, Nigerian Army Bauchi, has arrested 4 persons suspected to be Boko Haram terrorists spies that include the one that carried out surveillance on the Madalla church before it was bombed.

The men Victor Moses, Abubakar Shettima, Salisu Mohammed Bello and Umar Sadiq Madaki have been carrying out surveillance mission for the Boko Haram terrorists on target for suicide bombings or attacks.

Luck ran out for them when Victor Moses went to a mosque in Bauchi State and pretended that he wanted to be converted to Islam and the people suspecting that he was not genuine, promptly reported the matter. On interrogation he confirmed that he was working for an Islamic cleric in Gombe (now at large) and that their point of contact was Abubakar Shetima based in Jos. He confessed to casing targets for suicide bomb attacks including that of the Catholic Church Madalla, Suleja, Niger State on Christmas day, 25th December 2011.

The accused persons who are currently undergoing further interrogation, were paraded by the Commander 33 Artillery Brigade, Brigadier General Abraham Dusu at the Brigade’s Headquarters, Shadawanka Barracks, Bauchi on Monday.