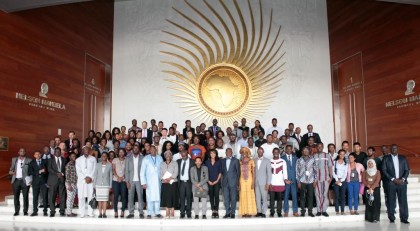 Department (HRST) of the African Union commission (AUC) honoured the Celebration of Youth Volunteerism under the theme “Volunteerism as a human centered approach to ensuring Human Rights towards the realization of Agenda 2063”. The African Union Youth Volunteer Corps (AU-YVC) is a continental development program that recruits and works with youth volunteers, to work in all 54 countries across the African Union. AU-YVC promotes volunteering to deepen the status of young people in Africa as key participants in the delivery of Africa’s human development targets and goals. It brings people together to share skills, knowledge, creativity and learning to build a more integrated Continent and by implication strengthen Africa’s relevance in the globalized world.

In his opening remarks, HRST Ag. Director Dr. Mahama Ouedraogo noted that it was the first time the AU held this occasion and congratulated the volunteers on their successful completion. He mentioned that in January 2010 the Heads of State government embraced youth volunteering to promote youth empowerment which led to the formation of the AU-YVC. It is a continental program that recruits, trains and deploys youth in a competitive and transparent format and enables them to participate in the social, economic and political development of Africa. He further expressed his appreciation to all AUC departments, partners and Heads of State and government for their contribution to the success of the AU-YVC programme. In addition, he acknowledged that the AU Volunteer corps has provided human resources as a result filling the gaps for personnel.

H.E. Martial De Paul Ikounga, Commissioner of HRST, addressing the participants underscored that youth volunteers are very much needed and should be invited to participate in the program. The Commissioner said, “Volunteers who are coming to the African Union should be well aware of the abilities and capabilities of the volunteers who intended to join the program and we shall prepare them well for their support in assisting the staff members. A fair and transparent way of selecting youth volunteers should take place in the first selection process”.

The celebration was an interactive one, questions were posed and H.E. Martial De Paul answered some of the questions raised by volunteers and participants on issues concerning the challenges and critical successes of the program. Responding to a question on extending the volunteering term to more than 12 months, he mentioned that instead of extending the volunteering contract, the department or organization should offer the volunteer a position. The commissioner concluded his speech by declaring that the AU-YVC Program as one of the best AU programs which is a key modernity to promote youth participation in the development of Africa.

Also speaking at the ceremony, Mr Jacob Enoh Eben, spokesperson of the chairperson (BCP) of the AUC expressed his delight, remarking that Volunteers and interns could be considered as young professionals who are given an entry into professionalism in the private or the public sector. Furthermore, Mr. Jacob highlighted that African youths need a channel to grow and unleash their full potentials and the Commission is giving the youths that golden opportunity.

In the same atmosphere, Mr. Octavio H. Diogo, AU-YVC Alumni and Incoming Director, ZAYRA Africa appreciated the efforts done by the AU, volunteers are professionals who are competent and have the required skills and experience to provide positive impact to community. “Volunteering in the AUC was indeed a rear opportunity to gain experience in policy making processes that will transform the continent”.

Ms. Rizzan Nassuna, AU-YVC Alumni, now Democracy Assessment and Governance Expert of the Department of Political Affairs of the AUC stated that being a youth volunteer is a legacy that is carried along. She added that this year is the year of Human Rights with particular focus of women, there is nothing Human Rights that does not concern Youth.

In her vote of thanks, Ms. Patience Kente an AUYVC alumni and Consultant Office of Secretary General said, “our job is not yet done, our job has just begun. We have a critical role to play to ensure visibility as well as continuity of this great programme”. She added that AUC Volunteerism should seek to guide, mentor and groom other youths who have the vision of a better Africa. She further expressed the need to create space for dialogue for African youths to share different ideas on peace and security, integration, youth engagement and participation and popularize AU flagship projects including the AU agenda 2063, the CFTA among many others.