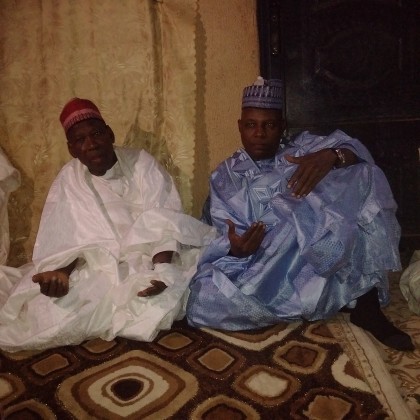 Shettima who is chairman of the forum, made up of 19 Governors across the three geo-political zones that make up the north including the bereaved, arrived Kano at 6pm and proceeded to Ganduje village, some kilometers away from Kano city.

” I am here on behalf of our forum to condole with our elder brother, a father, a family and a leader with outstanding humility in this moment of grief” Shettima was quoted by his spokesman, Isa Gusau in a statement emailed Sunday night.

The forum, Shettima said, shares the ‎grief of Governor Ganduje and said the pour of sympathy by the villagers in Ganduje who besieged the family house the late woman as well as condolences from nd persons in all works of life particularly in the north, was enough evidence that Hajiya Fatima not only lived a good life but also transmitted her good virtues to her son, Governor Ganduje.

The forum described the late Hajiya Fatima as a fulfilled woman who gave birth and nurtured a leader that is contributing in not only the progress of Kano but also the productivity of the Nation. ‎The northern Governors also eulogised the Governor for what it called, the full return of peace in Kano depicted in the manner citizens were going about huge commercial activities even at night across the State.

Shettima offered prayers for the repose of Hajiya Fatima on behalf of the forum asking God to admit her into paradise and bless her survivors.

The Chief mourner, Governor Abdullahi Umar Ganduje expressed profound appreciation ‎describing Governor Shettima as a true brother and friend for taking the pains of traveling all the way to Maiduguri to Ganduje village. He said his family was grateful to the Governors Forum for standing by it. He also spoke about 100 Borno children, orphaned by Boko Haram insurgents who were adopted by Kano State Government about two years ago, noting that the children were doing well on education while Kano Government, he pledged, will shoulder their education up to the University levels.