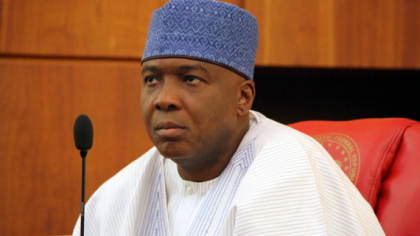 Senate President, Dr. Abubakar Bukola Saraki on Monday expressed deep shock and disbelief over the demise of Minister of State for Labour and Productivity, Chief James Ocholi, his wife and eldest son in a road mishap along the Abuja – Kaduna road on Sunday.

The Senate President has also condemned the murder of an All Progressives Congress (APC) chieftain, Mr. Franklin Obi, his wife and 18-year old son in Rivers State.

Saraki in a statement signed by his Special Adviser, Media and Publicity, Yusuph Olaniyonu in Abuja, described the tragic death of such a “promising Nigerian” like the late Minister as a colossal loss to the present administration in particular and the country at large.

He condoled with President Muhammadu Buhari, members of the Federal Executive Council (FEC), the Governor and people of Kogi State, leaders and people of North Central zone and the immediate family of the deceased over the unfortunate incident.

Saraki said: “I still recall when the late Ocholi appeared before the Senate to be screened and confirmed as Minister a few months ago. He was not only full of life, he came across to me as a man of great ideas and accomplishments.

“He was very articulate and brilliant in his presentation and gave good account of himself as Senior Advocate of repute, who given the chance to discharge the duty assigned to him, would have contributed immensely in turning around the story of unemployment in this country.

“His death and that of his wife and eldest son, is a colossal loss to me, his immediate family, the people and government of Kogi State, the leadership of the All Progressives Congress (APC) and the entire country”, he stated.

He prayed God to grant the souls of the deceased enternal rest, while he urged Nigerians especially his immediate family to be comforted by the fact that Ocholi breathed his last while on acting service for his father land.

Meanwhile, Saraki has called on security agencies to unravel the masterminds of the dastardly killing of Rivers APC Chieftain, Franklin Obi and members of his immediate family.

Saraki described the avoidable bloodletting as callous and called on security agencies to ensure adequate protection of lives and property across the country to prevent repeat occurrence.