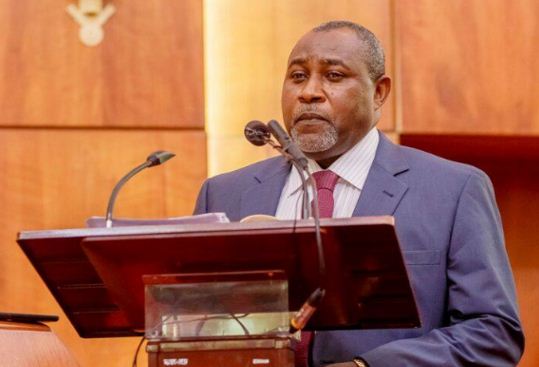 President Muhammadu Buhari has expressed shock and sadness over the death of Minister of State for Labour, Mr James Ocholi, who, together with his wife and son, died in a car crash on Kaduna/Abuja expressway on Sunday.

This is contained in a statement issued in Abuja on Sunday by Malam Garba Shehu, Senior Special Assistant on Media and Publicity to the President.

The president maintained that late Ocholi was an accomplished and patriotic Nigerian, who was keen to accept the call to service at a time his country needed him.

According to the president, in the few months he had been in office, he had started to distinguish himself through his commitment and dedication to his portfolio.

Buhari also consoled with the government and people of Kogi, for having lost a distinguished son.

He prayed that God would comfort and grant them the grace to bear the loss.

“The entire country mourns the loss of this great man, who has sadly left us when we need him most’’, he said.

According to the statement, Buhari has sent the Secretary to the Government of the Federation, Eng. David Babachir to formally convey the news to members of the deceased family as well as parishioners in his place of worship.

The late Ocholi has had a long record of political association with Buhari.