The sudden death of the Minister of State for Labour and Employment, Late Barrister James Ocholi, his wife and son, remains a shock to so many. 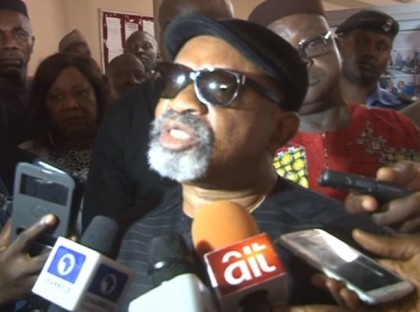 At the ministry, the mood was low as his office was shut. While the Minister for Labour, Dr. Chris Ngige, recalled the complimentary roll of Late Barrister James Ocholi in resolving industrial crisis, in the little time he spent in the Ministry.

Although, his immediate family did not comment on the sudden death but, condolers at his residence in Kado, Abuja say, he will be greatly missed.

The Secretary to the Government of the Federation, Engr. Babachir Lawal who led Mr President Delegation to the hospital where their bodies are deposited conveyed condolences to the family.

Five other staff involved in the accident are receiving treatment

CATEGORIES NewsObituary
TAGS Dr. Chris NgigeEngr. Babachir Lawalhis wife and sonLate Barrister James OcholiMinister for LabourMinister of State for Labour and EmploymentThe Secretary to the Government of the Federation
Share This