H.E Mr. Erastus Mwencha, Deputy Chairperson of the African Union Commission has called on the United Nations General Assembly (UNGA), to strengthen their commitment to Africa. 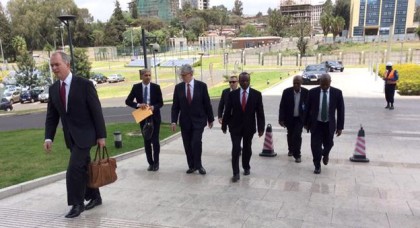 Speaking on 4th March at the AU Headquarters in Addis Ababa, during the address to the Permanent Representative Committee by the UN General Description: Description: UNGA 1.jpgAssembly President H.E. Mogens Lykketoft, Mr. Mwencha highlighted the fact that over two-thirds of the Members of the UN General Assembly are from developing countries, including the fifty four (54) members of the African Union. Further, of the 49 least developed countries, 34 countries are in Africa which then accounts for over 60% of the UN Peace Keeping operations. In this regards, he observed that African countries, therefore should be a focus and priority to the UN General Assembly in line with the United Nations Charter.

The Deputy Chairperson of the African Union Commission called for more commitment and strengthened partnerships from the UN General Assembly on among others, synergies and the joint implementation of the African Union’s Agenda 2063 and the Sustainable Development Goals (SDGs), which he noted are mutually supportive and coherent in achieving the goals set out in the first 10 years of Agenda 2063. The entire 17 SDGs are encapsulated in the goals of the AU Agenda 2063, making it easier to integrate them into the National and Regional Strategic frameworks and action plans. He noted that this called for a common framework for joint monitoring and evaluations.

In this regard, the UN General Assembly President H.E. Mr. Mogens Lykketoft affirmed the need for continued engagements and the need to work together to bring true and real change in the lives of people through poverty eradication with an aim to put the world on the right path towards peaceful societies, human rights and inclusive sustainable development.

Mr. Mwencha at the same time restated the need to reform the UN Security Council as the AU continues in its push to have at least two African countries have permanent slots in the UN Security Council to address the current under-representation of Africa. African leaders have previously expressed reservations that the permanent UNSC members have not adequately advanced the interests of Africa. African states have also called for a review of the election of the position of the UN Secretary General this year, seeking to have it conducted by the UN General Assembly. On this issue, Mr. Lykketoft undertook to convene informal dialogues between the candidates and the UN membership to increase transparency around the election process. He added that African countries, which collectively represent the largest coherent voting bloc in the General Assembly, can play a critical role in various processes in the Assembly.

AU is further pushing for a more apt review of the relationship between the International Criminal Court (ICC) and African states. Africans states have in the past accused the court of unfairly targeting leaders in the continent. With about one-third of the court’s member states being from Africa, Mr. Mwencha underscored the need to review the role and development of the international criminal justice on the African continent.

Both Mr. Mwencha and Mr. Lykketoft noted that significant strides have been made in recent years, in consolidating peace and the rule of law, in fostering high levels of economic growth and in advancing human development in Africa and committed to working towards closer relations between the AU and the UN General Assembly.