Justice Okon Abang of the Federal High Court sitting in Abuja, on Wednesday, March 9, 2016 dismissed the “no-case” submission brought by the embattled National Publicity Secretary of the Peoples Democratic Party, PDP, Olisa Metuh, who is standing trial on a 7-count charge bordering on illegal diversion of funds meant for the procurement of arms preferred against him by the Economic and Financial Crimes Commission, EFCC. 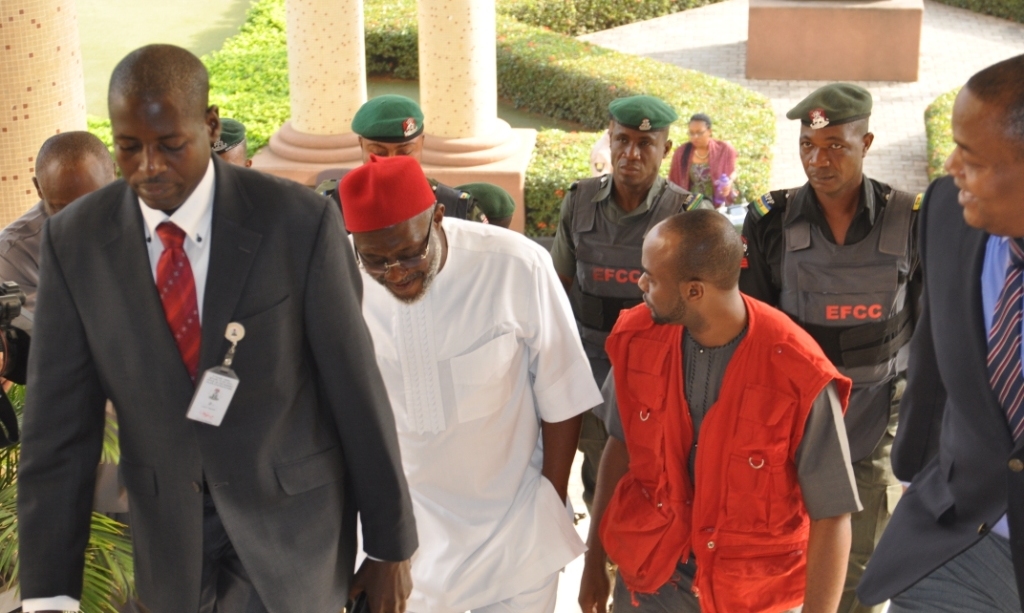 He allegedly received the sum of N400 million (four hundred million naira) from the former National Security Adviser (NSA), Col. Sambo Dasuki (rtd) who is being tried for laundering $2.1 billion.

Metuh had on Thursday, February 25, 2016 through his counsel, Onyechi Ikpeazu, SAN, filed a “no-case” submission on the grounds that, the prosecution did not establish the essential elements of the offences charged, a situation he said rendered the case against him manifestly unreliable.
The EFCC however urged the court to dismiss the submission of the defence.

The anti graft agency insisted that, it had through oral and documentary evidence that were presented by eight witnesses it brought before the court, established a prima-facie criminal case to warrant Metuh to enter his defence.

Ruling on the matter today, Justice Abang, held that, he was satisfied that there was a prima-facie nexus linking the defendant and his company, Destra Investment Limited, to the N400million that was transferred from an account the Office of the National Security Adviser, ONSA, operated with the Central Bank of Nigeria, CBN, on the order of the erstwhile NSA, Col. Sambo Dasuki,( retd).

“I have heard from the prosecution and I am satisfied that a ‎prima-facie case has been made out against the defendant. Metuh had in a statement he made before the EFCC admitted that he was the sole signatory to the account where the fund was lodged in. It is my view that only when the 1st defendant enters his defence, that it will be clear if he knew that the transfer of the N400m formed part of illegal proceeds of crime by the former NSA”, Justice Abang held.

“The no-case submission lacks merit and same is accordingly dismissed. The defendant is to enter his defence today”, the court ruled.
However, Metuh’s counsel, Ikpeazu, SAN, prayed the court for an adjournment to enable the defence apply for a subpoena to be issued on persons he intends to call to testify for him.

The application was opposed by the prosecution counsel, Sylvanus Tahir, who argued that the request of the defence is unnecessary as the defendant ( Metuh) is in court as a credible witness and can testify.

He urged the court to compel him to immediately mount the witness box to explain all he knew about the alleged illicit transactions.
Earlier, in a separate judgment, Justice Abang refused to declare the 10 days Metuh spent in EFCC custody illegal and unconstitutional.

Metuh had earlier through his counsel , Ikpeazu sought for fundamental right enforcement claiming that he was unlawfully detained by the EFCC.
The court held that, the anti-graft agency acted within its powers, having obtained a remand order from an Abuja Chief Magistrate Court.

‎It stressed that Sections 6, 7, and 41 of the EFCC Establishment Act, and Section 31(1) (c) of the 1999 Constitution, as amended, empowered the agency to arrest the applicant upon reasonable suspicion that he committed a criminal offence.

Consequently, Justice Abang dismissed the case and ordered the applicant, Metuh, to pay the sum of N15,000 (fifteen thousand naira) as costs to EFCC.

The case has been adjourned to ‎March 17, 2016 for Metuh to open his defence.