The Minister of Information and Culture, Alhaji Lai Mohammed, has appealed to the Voice of America (VOA) to ensure a more balanced coverage of the Boko Haram insurgency by its Hausa Service. 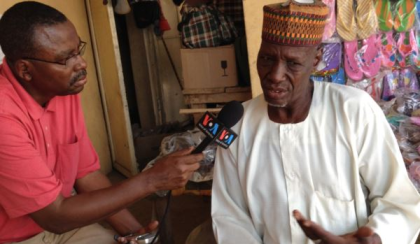 The Minister made the appeal in Abuja on Tuesday while receiving a delegation from the African Division of the VOA, led by its Director, Mr. Negussie Mengesha.

He noted that there had been allegation that the Hausa Service of the VOA’s reporting of the war
is being skewed in favour of the insurgents, and urged the international broadcaster to correct the perception.

“However, I must say that in recent times, there have been lots of complaints about the Voice of America from the same part. People have not been too happy about the way the insurgency has been reported in recent times,” Alhaji Mohammed said.

He noted, however, that in spite of the allegations, the VOA remains the favourite channel ”for many of our brothers and sisters in the North”, particularly during the time of the insurgency, which significantly affected the capacity of the local broadcasters to reach out to the people.

“When I read the article (on the VOA coverage of Boko Haram), I said it could mean two things. One, that the Voice of America is still very relevant in Nigeria and, secondly, the perception out there is that the audience probably wants more of balancing of stories than anything,” the Minister said.

He commended the VOA for its various capacity building programmes for journalists in the country and stressed the need to have an exchange programme between the American broadcasting organization and Nigeria’s public broadcasters.

Alhaji Mohammed also lauded the VOA for expanding its reach through the Social Media, saying: “Social Media today is so pervasive. It might not be believed by all but the penetration is probably deeper than that of the conventional media. It is instantaneous, viral and it has no boundary. I must commend you for your effort to move from radio to a multi-media platform,” he said.

Responding, Mr. Mengesha denied the allegation that the coverage of the Boko Haram insurgency by the VOA Hausa Service is slanted in favour of the insurgents.

“I think the Hausa Service is the real enemy of Boko Haram. The entire Northern Nigeria has been affected by this crazy madness and in fact we took one of our reporters and kept him for six weeks in Northern Nigeria to have first hand investigative reports and he did an excellent job,” he said.

Mr. Mengesha, who said he was disappointed by the allegation contained in an article published in the Daily Trust of Saturday, March 5th, however expressed the readiness of VOA to correct the perception.

For his part, the Managing Editor, Hausa Service of the VOA, Mr. Aliyu Mustapha, dismissed the allegation of biased coverage of the insurgency by the Service as reflected in the said article as ”unsubstantiated”, and assured that the VOA will continue to partner with Nigeria to build on the successes it had recorded in the anti-terror campaign.

Also at the occasion, Ms. Joan Mower, Director, Development and International Media Training for the Broadcasting Board of Governors, commended the Nigerian media for the enviable role it played towards the eradication of polio in the country, adding that journalists from other countries would soon visit Nigeria to understudy the role of the country’s media in that regard