VP Prof. Yemi Osinbajo Has Stood By Borno, We Celebrate Him At 59′ – Gov. Shettima

Vice President Yemi Osinbajo has shown the people of Borno State true love and solidarity since his assumption of office and as such, Government of the State holds him in very passionate respect and happily celebrates his 59th birthday, Governor Kashim Shettima has said. 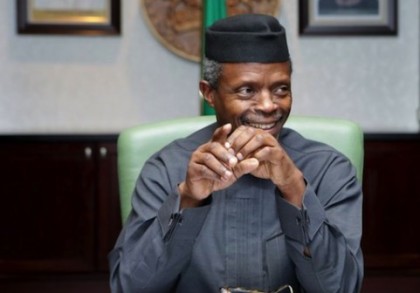 Shettima said “the 59th Birthday of the Vice President, Professor Yemi Osinbajo is personal to us in Borno State. In less than 10 months of coming into office, Professor Osinbajo has visited Borno no less than three different times during which he sort to know our problems as Government, he had visited hospitals, met thousands of internally displaced persons and even transferred and personally sponsored treatment of a critically injured child that was brought to the hospital after an attack while the Vice President was in the State. Also in one of his visits in 2015, Vice President Yemi Osinbajo held meetings with leadership of the military and armed forces on ground in Maiduguri, to get direct information about their concerns with a view to strengthening the fight against insurgency and this was before another visit to Borno State for coordination of humanitarian interventions and launching of a Presidential economic blueprint that aims at not only rebuilding parts of northeast destroyed by Boko Haram insurgents but also revitalizing the economy of the region to lower it’s alarming poverty and unemployment rate. Beside his personal visits, he had sent representatives at least four times for different intervention programs one of which was the launching of mobile classrooms by the Federal Government to compliment in sustaining education at internally displaced persons’ camps. We pray that God grants the Vice President many more years of good health, strength, happiness and increasing wisdom to continue his glaring good works on behalf of the President, for the benefit of all Nigerians” Shettima was quoted by his spokesman, Isa Gusau in a statement emailed on Wednesday.

The Governor also recalled that in the last 10 months, there was never a time, Borno suffered any major attack from Boko Haram that Vice President Yemi Osinbajo failed to contact the Government of Borno State, on behalf of President Buhari to express sympathy and to also encourage the Government and people to remain steadfast in the face of the challenge.

“The Vice President passionately and competently represents President Muhammadu Buhari, both of them make a miraculous team that will fix this country through recovery and re-engineering” Shettima was quoted again.

The Borno Governor added that for him as member of the Northern States Governors’ Forum with a clear interest in the development of the northern region, the regular participation of the Vice President in different events intended to develop strategies towards taking the north out of its present bondage, makes the Vice President a true statesman that represents the entire country.