Fight For A Place In My Team, Super Falcons Coach – Chiejine

No permanent or automatic jerseys in the team. Ann stated that the team is shaping up with all home -based players already in camp while the foreign -based players are expected in camp anytime, Super Falcons Assistant Coach, Ann Chiejine said. 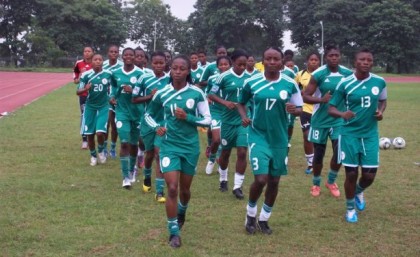 Ann said “They are responding to training. Despite the fact that we just started full training on Monday, I am very sure that within a little time, they will be able to get there.

“Despite the fact that the league season has not been on, I am happy about the response of the players to the training program. The way they are putting everything they have into the training sessions, I feel with time they will be able to get to where we want them to be.”

Ann also believe there is still more than enough time before the team’s qualifying matches to work with the team.

“We have about a month before the first match in the qualification series and with all that we are teaching them right now, they’ll be able to cope before that time.”

There was a sound of warning to all players that selection would be on merit as there would be no guarantees of starting shirts no matter what past reputations they have.

“We spoke with the Head Coach and we all agreed to make it an open contest. It’s a new set of technical crew. No permanent jersey for anybody. You’ll have to come and fight for a jersey.

“We have twenty-seven home based players while we are waiting for the professionals to come. So, when they come they’ll have to fight to get their jersey.

“This is why we are trying to see how we can blend the young, the old and the new together,” Chiejine concluded.